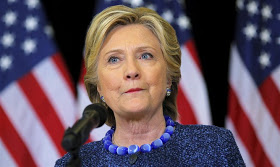 Read the report from CNN below…

Hillary Clinton’s campaign said Saturday it will take part in efforts to push for recounts in several key states, joining with Green Party candidate Jill Stein, who has raised millions of dollars to have votes counted again in Wisconsin.

But, in a post on Medium, Marc Elias, the campaign’s counsel, said the campaign’s own investigation has not uncovered any evidence of hacking of voting systems.

In the campaign’s most detailed comments to date on the recount, Elias wrote that while the campaign was not going to contest the results itself, it has decided now to take part in the effort to “ensure that it is fair to all sides.”

But President-elect Donald Trump on Saturday dismissed the recount and said that “the election is over.”

“The people have spoken and the election is over, and as Hillary Clinton herself said on election night, in addition to her conceding by congratulating me, ‘We must accept this result and then look to the future,'” Trump said in a statement, which called the recount “ridiculous” in a headline.

The President-elect blasted the Green Party’s effort as a “scam” and accused the party’s nominee, Jill Stein, of trying to reel in donations that she won’t actually spend on a recount.

“This recount is just a way for Jill Stein, who received less than one percent of the vote overall and wasn’t even on the ballot in many states, to fill her coffers with money, most of which she will never even spend on this ridiculous recount,” Trump said. “This is a scam by the Green Party for an election that has already been conceded, and the results of this election should be respected instead of being challenged and abused, which is exactly what Jill Stein is doing.”

Green Party officials filed Friday for a recount in Wisconsin after reports of voting discrepancies.

Wisconsin Green Party co-chairman George Martin said that the party was seeking a “reconciliation of paper records” — a request that would go one step further than a simple recount, which is expected to begin next week, and that he hopes will spur an investigation into the integrity of the state’s voting system.

“This is a process, a first step to examine whether our electoral democracy is working,” Martin said.

Elias said the campaign had been quietly investigating accusations for a while and had received hundreds of requests that it do so.

“Because we had not uncovered any actionable evidence of hacking or outside attempts to alter the voting technology, we had not planned to exercise this option ourselves, but now that a recount has been initiated in Wisconsin, we intend to participate in order to ensure the process proceeds in a manner that is fair to all sides,” Elias wrote on Medium.

“If Jill Stein follows through as she has promised and pursues recounts in Pennsylvania and Michigan, we will take the same approach in those states as well,” he added.

Brian Fallon, spokesman for the Clinton campaign, said the team would not have sought the recount on its own and that they see no evidence of tampering so far.

“We note we are guarding our prerogatives now that someone else has launched a recount. Not sure what you could point to to suggest there is anything here that calls the results into question,” he told CNN.

In addition to Trump’s total combined margin of victory in Michigan, Wisconsin and Pennsylvania being only about 107,000 votes — by contrast, the Florida margin in Bush-Gore was 537 ballots — Elias said concerns about Russia’s interference in the election continue to raise concerns.

“This election cycle was unique in the degree of foreign interference witnessed throughout the campaign: the U.S. government concluded that Russian state actors were behind the hacks of the Democratic National Committee and the personal email accounts of Hillary for America campaign officials, and just yesterday, the Washington Post reported that the Russian government was behind much of the “fake news” propaganda that circulated online in the closing weeks of the election,” he wrote.

A senior administration official said in a statement that there is no evidence of any hacking.

“The federal government did not observe any increased level of malicious cyber activity aimed at disrupting our electoral process on Election Day,” the official said. “As we have noted before, we remained confident in the overall integrity of electoral infrastructure, a confidence that was borne out on Election Day. As a result, we believe our elections were free and fair from a cybersecurity perspective.”

The Clinton campaign has met with lawyers, data scientists and analysts to assess anomalies in the results that would suggest a hacked result. Private meetings with outside experts involved sharing both groups concerns about the data and findings.

Clinton’s team said they investigated every theory presented and examined laws and practices pertaining to recounts, contests and audits.

“And most importantly, we have monitored and staffed the post-election canvasses – where voting machine tapes are compared to poll-books, provisional ballots are resolved, and all of the math is double checked from election night,” Elias said. “During that process, we have seen Secretary Clinton’s vote total grow, so that, today, her national popular vote lead now exceeds more than 2 million votes.”

The campaign plans to move forward in monitoring activities to better understand the results.

“In the coming days, we will continue to perform our due diligence and actively follow all further activities that are to occur prior to the certification of any election results,” he said.

It is “unfortunate” that all states don’t conduct “post-election” audits.

“Wisconsin and Pennsylvania conduct post-election audits using a sampling of precincts. Michigan and many other states still do not,” Elias wrote. “This is unfortunate; it is our strong belief that, in addition to an election canvass, every state should do this basic audit to ensure accuracy and public confidence in the election