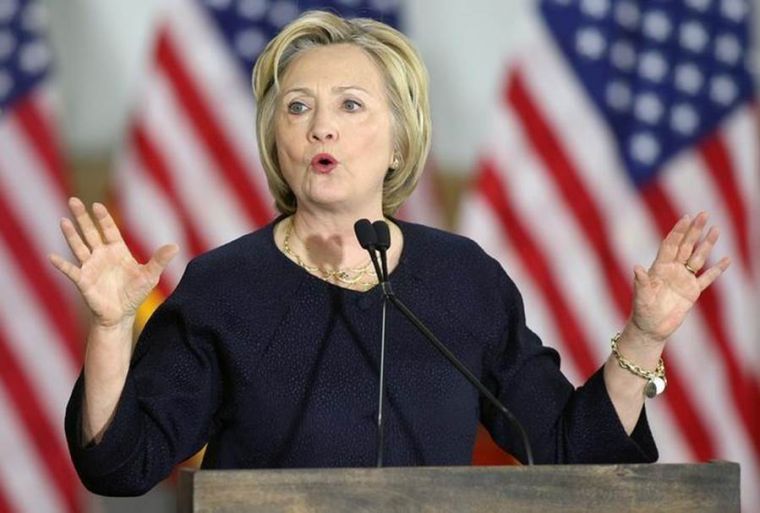 Hillary Clinton faced questions from the FBI last
week on her use of emails while in government.

Hillary Clinton has attacked Donald Trump as
“blatantly antisemitic” for a tweet that featured a
six-pointed star.

The tweet from the Republican presidential hopeful
depicted Clinton on a background of cash with a
symbol that resembled a Star of David. The star
contained the description, “most corrupt candidate
ever!” in reference to the Democrat candidate.

It prompted a furious backlash on social media for
its apparently antisemitic undertones. The reaction
only intensified when it emerged the image first
appeared on /pol/, according to the news site Mic.com. The far-right messaging site shared the image more than a week before Trump’s campaign
did. It appeared under a thread named
HillHistory.jpg, a possible nod to the neo-Nazi code
for “HH” or “Heil Hitler”, according to Mic.com.

Clinton’s campaign told US media: “Donald Trump’s
use of a blatantly anti-Semitic image from racist
websites to promote his campaign would be
disturbing enough.

“But the fact that it’s part of a pattern should give
voters major cause for concern.”

Trump retorted with a statement of his own that
said accusations of antisemitism were “ridiculous”
and it was a “basic star, often used by sheriffs”.

The image was first shared by Donald Trump’s
account on twitter on Saturday morning. But hours
later it was deleted and the image was shared again
but with the star changed to a circle.

Trump’s campaign team have denied the image
was taken from an antisemitic website. The New
York billionaire accused Clinton of trying to take
attention away from her husband’s meeting with
the US attorney-general.

Trump has previously been attacked for reposting
comments made on white supremacist forums and
was criticised for not immediately distancing himself
from David Duke, a leader of the Ku Klux Klan, who
had endorsed him.