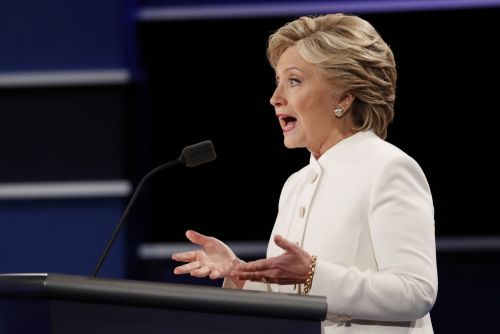 Democratic Party nominee Hillary Rodham Clinton defended the legalization of aborting babie up until the moment of delivery in the third presidential debate.

At the final presidential debate between her and Republican Party nominee Donald Trump on Wednesday, Clinton was asked by Fox News’ Chris Wallace her views on to what extent abortion should be regulated.

“You have been quoted as saying that the fetus has no constitutional rights. You also voted against a ban on late-term, partial-birth abortions. Why?” asked Wallace.

Clinton told those gathered at the University of Nevada in Las Vegas that “Roe v. Wade very clearly sets out that there can be regulations on abortion so long as the life and the health of the mother are taken into account.”

“The kinds of cases that fall at the end of pregnancy are often the most heartbreaking, painful decisions for families to make,” said Clinton.

“I do not think the United States government should be stepping in and making those most personal of decisions. So you can regulate if you are doing so with the life and the health of the mother taken into account.”

Trump, who said earlier in the debate he would appoint pro-life judges to the United States Supreme Court, pressed Clinton about her position on abortion.

Clinton responded to Trump’s criticism by stating that it was “scare rhetoric” and restated that “I do not believe the government should be making it.”

Conservatives have argued that Clinton is an extremist on the abortion, with her campaign platform opposing a late term abortion ban and supporting the removal of the Hyde Amendment, which limits federal funding of abortion.

When it comes to the Hyde Amendment, a YouGov poll found that 55 percent of Americans, as well as 41 percent of Democrats, support the ban.

“For decades this compromise has been fairly uncontroversial, but for the first time in 2016 the Democratic Party platform calls for federal funding of elective abortions.”