Democratic party U.S presidential candidate Hillary Clinton leads the polls by 5 points ahead of republican rival Donald Trump ‘in a much tighter race’ with two weeks left to the election that’ll determine who succeeds Barack Obama at the White House. 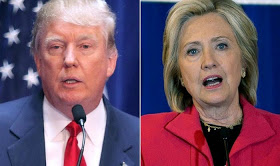 According to a new CNN/ORC poll among likely voters, Clinton tops Trump 49% to 44%, while Libertarian party candidate Gary Johnson  has 3%  and 2% of likely voters back Green Party nominee Jill Stein.

Clinton now stands at 53 per cent among voters under age 45, compared with 47 per cent in the previous CNN/ORC poll. The only age group where Clinton currently trails Trump is among 50-64, who back Trump by four points in this poll, CNN said.

Clinton has a wide 12-point lead among women due to his recently released 2005 lewd comments video, while Trump edges Clinton by a narrow three-points among men.