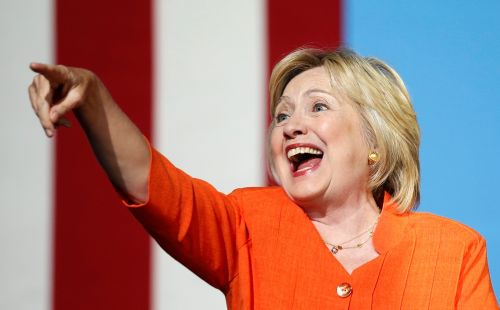 Democratic presidential candidate Hillary Clinton is
now leading her Republican rival Donald Trump by
7.5 points as she consolidated support of
Democrats as their party’s nominee thanks to the
last month’s national convention, while the real
estate mogul failed to do so, according to the Real Clear Politics average of recent polls.

Clinton and her vice presidential pick, Sen. Tim
Kaine, now lead Trump and his running mate, Gov.
Mike Pence, by 50 percent to 42 percent among
registered voters, up from the four-point
advantage the Democrats held just before the
Republican convention in mid-July, shows the Washington Post-ABC News poll, released Sunday.

The poll says Trump’s overall image hasn’t
improved despite efforts primarily by his children to
use their convention speeches to portray him as a
loving father and a successful business executive.

Nearly 60 percent of voters say he is not qualified
to be president, just as they did before his
convention, and about 30 percent say they would
feel comfortable if he were to become president.

After the Democratic and Republican conventions, a
slight plurality of Clinton supporters now back
Clinton because they want her to be the president
rather than simply to oppose Trump, the poll says.
Trump’s position has also improved, but only
slightly. And the percentage of support he gets from people who are doing so out of enthusiasm
for his candidacy is still lower than the percent who
said that about Clinton before the conventions
began. The poll found that while 57 percent of
those who backed Trump did so because they
opposed Clinton before the conventions, that figure was 56 percent after the conventions.

The poll also suggests that Trump’s criticism of
Khizr Khan after his speech at the Democratic
convention was counterproductive.

Khan, the father of Army Capt. Humayun Khan, who
was killed by a car bomb in 2004 while guarding
the gates of his base in Iraq, criticized Trump’s
stand on Muslims in his speech, and also said that
the Republican candidate has “sacrificed nothing
and no one.”

Trump responded by asking, “Who wrote that? Did
Hillary’s scriptwriters write it?”

Trump also asked why Khan’s wife, Ghazala, who
stood beside her husband on stage, did not say
anything, alluding to restrictions on women in
some Muslim societies.

Meanwhile, Ohio Gov. John Kasich and Sen. Jeff
Flake from Arizona, both Republican, said in media interviews that Trump must change as a candidate
to prevent Clinton from claiming their states.

“He’s going to win parts of Ohio where people are
really hurting. There will be sections he will win
because people are angry, frustrated and haven’t
heard any answers. But I still think it’s difficult if you
are dividing to be able to win in Ohio. I think it’s
really, really difficult,” Kasich said on CNN’s “State of the Union” on Sunday.

Flake said on CBS’s “Face the Nation” that Trump
should take more “responsible positions” in his
state, where the Hispanic population is growing.