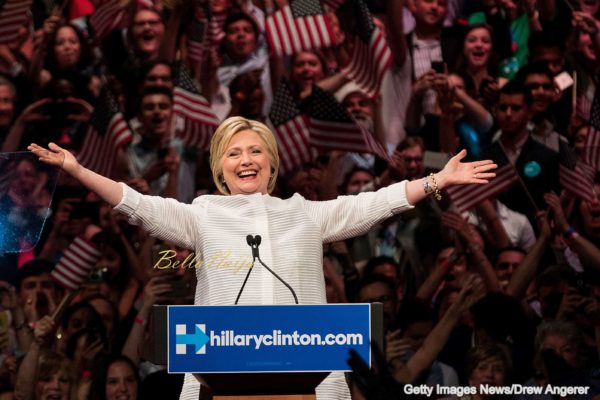 It was a Super Tuesday for Hillary Clinton when she declared victory in the Democratic presidential primary on Tuesday, making it the first time a woman will capture the nomination of a major political party in 240 years of the United States’ history!

She took the stage at the Brooklyn Navy Yard after winning a majority of pledged delegates to deliver a soaring speech that appealed for party unity against Donald Trump ahead of what she framed as a battle for “America’s very identity as a nation”.

NEW YORK, NY – JUNE 7: Democratic presidential
candidate Hillary Clinton arrives onstage during a primary night rally at the Duggal Greenhouse in the Brooklyn Navy Yard, June 7, 2016 in the Brooklyn borough of New York City. Clinton has secured enough delegates and commitments from superdelegates to become the Democratic Party’s presumptive presidential nominee. She will become the first woman in U.S. history to secure the presidential nomination of one of the country’s two major political parties. (Photo by Drew Angerer/Getty Images)

She payed tribute to the history-making moment from the 2008 Democratic primary that precluded her eight years to the day when she conceded to Barack Obama.

“Tonight caps an amazing journey – a
long, long journey….It may be hard to
see tonight but we are all standing
under a glass ceiling right now. But
don’t worry. We’re not smashing this
one. Thanks to you, we’ve reached a milestone. The first time in our
nation’s history that a woman will be
a major party’s nominee.”

While it is quite clear that Hillary Clinton would secure a majority of pledged delegates, her rival, Bernie Sanders has refused to bow out. He told supporters that their fight would continue to the Democratic National Convention in July.

We are going to fight hard to win the
primary in Washington DC,” he said,
referring to the caucus that is last in
line to vote next week. And then we
take our fight for social, economic,
racial and environmental justice to Philadelphia

Upon accepting the mantle of party standard- bearer, Clinton moved quickly to congratulate Sanders while acknowledging the unlikely revolution that has routinely drawn crowds in the tens of thousands to the senator’s rallies.