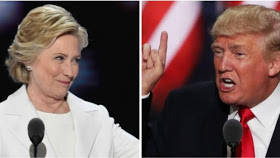 U.S presidential candidate Hillary Clinton has doubled her TV ads spending from $14m to $32.4m with just 5 days to the election, following Donald Trump’s surge in polls as a result of the FBI’s decision to begin proceedings and investigations into Hillary Clinton’s deleted emails stored on a private server while she was Secretary of State.

Hillary, who knows now that momentum is with Trump, has included in the last-minute, an $18 million influx which is nearly $5 million in additional airtime in Florida, a state that Donald Trump must win to reach the White House.

According to data from Kantar Media/CMAG, a company that tracks political advertising, the Republican National Committee has made its first adverts buy in support of Trump, putting up $2.9 million in five states including Florida, Michigan, Nevada, Colorado, New Mexico and Iowa.

According to CNN, both campaigns are focusing their spending on Florida, which will see nearly $10 million spent in ads this final week.