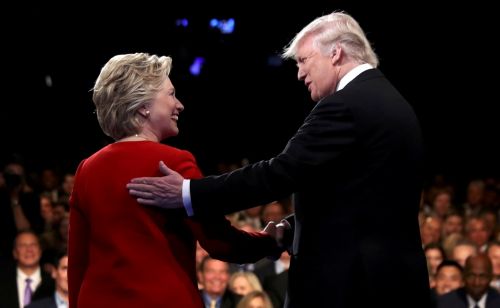 While Democratic presidential nominee Hillary Clinton prides herself on being one of the biggest supporters of abortion and the nation’s largest abortion provider Planned Parenthood, her Republican counterpart Donald Trump has said that he will be no friend to the abortion industry if wins the Oval Office.

For pro-lifers, former Sec. of State Clinton is disqualified from receiving their votes because of her strong stance in support of an abortion industry that has killed nearly 60 million unborn babies since 1973, and her belief that an unborn child has no rights.

Clinton is such a strong supporter of abortion that she became the first presidential candidate ever to receive an endorsement from Planned Parenthood during the primary elections.

Although many Americans throughout the country have religious reasons why they oppose abortion, Clinton believes that there should be an effort to change those religious principles, saying in 2015 that “deep-seated cultural codes” and “religious beliefs” opposing abortion “have to be changed.”

While it took a while for many evangelical and social conservative leaders to finally support the misogynistic, thrice-married casino owner and reality TV star after he earned the GOP nomination this past summer, many of them have taken confidence in Trump’s claim that he is pro-life (even though he asserted in 1999 that he is “very” pro-choice) and his vow to only appoint judges and justices who are pro-life and not beholden to the pressure of the abortion lobby.

Considering that the next president could be responsible for appointing anywhere from two to four Supreme Court justices and could have a major influence on the balance of the court for decades to come, there is no doubt that a President Clinton would appoint socially liberal justices who will interpret the Constitution to fit their own political agenda and continue to push the sexual revolution even further down the path that it is already on.

Although she has not released any specific names about who she would appoint to the Supreme Court, Clinton has stressed that she will only appoint justices who will uphold the 1973 ruling of Roe v. Wade, which legalized abortion nationwide.

“I want a Supreme Court who will stick with Roe v. Wade and a woman’s right to chose,” Clinton said during a town-hall style debate earlier this month.

As for Trump, he received guidance from conservative groups like the Federalist Society and the Heritage Foundation before he released a shortlist in May of 11 jurists who he would consider appointing to the Supreme Court if he becomes president.
That list was praised by prominent pro-lifers, including Susan B. Anthony List President Marjorie Dannenfelser. Additionally, University of California, Berkeley law professor John Yoo praised Trump’s list as a “Federalist Society all-star list of conservative jurisprudence.”

Trump’s running mate, Indiana Gov. Mike Pence, even went as far as to say that if Trump wins the election, Roe v. Wade would be overturned.

“We’ll see Roe vs. Wade consigned to the ash heap of history where it belongs,” Pence said this summer.

Additionally, the 2016 Democratic Party Platform also calls for the repeal of both the Hyde and Helms Amendments.

In August, Trump unveiled his “pro-life coalition,” which is being spearheaded by Dannenfelser and the SBA List.

In a statement issued by the Trump campaign, it asserts that the nominee not only stands against “advancing taxpayer-funded abortion on-demand,” but that he will also seek to make “the Hyde Amendment permanent law to protect taxpayers from having to pay for abortions.” Currently, the Hyde Amendment has to be attached to yearly appropriations bills.

Despite the Hyde Amendment stating that federal funds can’t be used to fund abortion on-demand, the nation’s largest abortion provider is able to receive over $500 million each year in federal tax dollars for its non-abortion services.

Trump reiterated that vow in astatement issued in September.

“I am committed to defunding Planned Parenthood as long as they continue to perform abortions and reallocating their funding to community health centers that provide comprehensive healthcare for women,” the statement reads.

While many conservatives are pushing for the passage of a Pain-Capable Unborn Child Protection Act, which would ban abortions after 20 weeks of gestation, Clinton told MSNBC’s Chuck Todd last year that she only favors abortion restrictions at the “very end of the third trimester” of pregnancy. Many pro-lifers have used Clinton’s “very end of the third trimester” comment to point out that Clinton really supports abortion up until birth.

Additionally, Clinton told Todd that she would only support such restrictions at the end of the third trimester only if there are exceptions for “the life and health of the mother,” along with in the cases of rape and incest.

As CP political analyst Napp Nazworth has pointed out, including exceptions for the health of the mother is just “Clintonian lingo” for a “huge loophole that allows for abortion for any reason,” because the Supreme Court has ruled that the meaning of “health” is left up to the abortionist.

As for Trump, he has vowed to sign the Pain-Capable Unborn Child Protection Act into law if he is elected president in order to “end painful late-term abortions nationwide.”

Trump also favors exceptions in the cases of rape, incest or when the mother’s life is in danger. Last April, he told the “Today” show that he would not include “the health of the mother exception.”

“I would leave it for the life of the mother, but I would absolutely have the three exceptions,” Trump said.

Trump raised eyebrows last March when he suggested during a town hall event with MSNBC’s Chris Matthews that there has to be “some form of punishment” for abortion if it is outlawed. Matthews followed up by asking Trump if he believed the punishment should be “for the woman.” Trump responded with a simple, “Yes.”

Clinton, along with many news outlets, pro-life leaders and fellow GOP presidential hopefuls, condemned Trump’s comments. Trump laterretracted his remarks by saying that the women who get abortions are victims and that abortionists should be the ones receiving the punishment.

“If Congress were to pass legislation making abortion illegal and the federal courts upheld this legislation, or any state were permitted to ban abortion under state and federal law, the doctor or any other person performing this illegal act upon a woman would be held legally responsible, not the woman,” Trump said. “The woman is a victim in this case as is the life in her womb. My position has not changed — like Ronald Reagan, I am pro-life with exceptions.”