“How A Gateman Helped Me To Get US Visa” – Pastor Oritsejafor 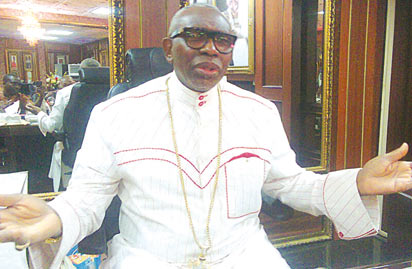 While acknowledging the ministers including the gospel musicians including Chioma Jesus, Monique, Edi Edwards Et al for their sterling contributions to the success of this year’s DOS convention, immediate past president of Christian Association of Nigeria, CAN, Pastor Ayo Oritsejafor enjoined the womenfolk not to undermine any opportunity.

He narrated how God once used a gateman to help him get an American visa after he was denied. According to him, he had been denied the visa and was going back dejected when he was this gateman smiling towards him, and wondering why a uniformed gateman was smiling and approached he managed to force a smile through the rejection.

“He greeted me and pushed a piece of paper into my hand,” he said, wondering what the gateman wanted. “I opened it and discovered it was the direct line of the American ambassador. I dialed it and after exchange of greeting the man asked what he could do for me. I told him I am pastor and I have a preaching appointment in the US but I have been denied visa.

“‘I had to pick your call because my secretary had just stepped out. I am not supposed to pick the call. Did you say you are a pastor? Please come in.’ And when I got in the man said ‘I am always delighted to deal with pastors because my dad was a reverend,” he stated, adding that the man signed his visa immediately. “But when I came out and I asked after the gateman I was told there was no such person in the place. The person was an angel of God. So don’t underrate anybody.”

Assistant president of DOS, Mrs Tina Dittimi’s assessment of the convention is not different from the earlier testimonies, saying “2017 DOS convention has been of the truth, the best we have ever experienced and to cap it all, the wonderful presentation by our Mama today. You could see the thousands of persons receiving empowerment today…it’s awesome. The fact that God looks at us and give us our daily bread.”

In an interview, Mama Helen expressed delight for the huge success of the event, describing it as “amazing. You can see what is going on in Nigeria, the recession, and then we have the opportunity to empower some people and give them something. Not just for them to have received spiritual bread, but they got the physical bread that they can use to transform their lives. So we give God the glory.”

What informed the health and business talk?

When God decides to empower us, He doesn’t just empower us spiritually but physically and otherwise. If you have a health challenge, there are things we should be able to do to transform our health life. The aspect of business is something that is important because a lot of people are dying of hunger. There’s no food, inflation has eaten deep into our society because of the recession. So what we tried to do is to see how they can leverage and convert the challenges we are in into opportunities so that they can prosper.

What therefore will you advise women at the end of the day?

They should take every opportunity that comes their way. I know quite a number of people are grumbling and complaining deeply; some have not been paid for over 10 months. I don’t even know how husbands are coping right now. When the wife shows up demanding for money for upkeep and the man hasn’t been paid…? So what I tell our women is that they should begin to add value. For those who are beneficiaries today, they should live their lives with the opportunities created for them and the money given, let them now deploy a judicious use by engaging with trade and see how they can multiply so that they can add value to their homes and in turn add value to the society

And for the nation?

We must not give up. It’s really hard for a lot of people, but we must have the right attitude at this time. If you need to go into farming, do so. If you can have a little farm in your house with vegetables, tomatoes, okro and so on, and to a large extent, it’s taken care of the aspect of food on the table. And to all Nigerians, we must c