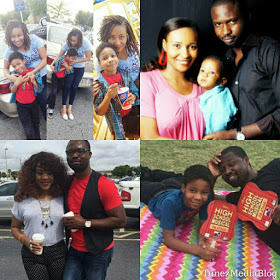 Few years back ace Nollywood actress Doris
Simeon, had cried out that her film director ex-
hubby, Daniel Ademonikan took away her son
from her when he moved in with his new wife,
popular gospel artiste/Nollywood actress, Stella Damasus..

After all efforts to get her child, David under her
care proved abortive, Doris was left with no choice
to move on with her life while her son enjoyed the
company of his father and new stepmother Stella.

David has now transformed into a full grown
healthy boy of 8 and his father, Daniel who cant
get enough of his little duplicate took to his social
media page to gush about his handsome son.

Doris Simeon’s mind can now finally be at rest,
now that she knows Stella Damasus has been
taking good care of David.

Tho Stella has never openly showed her motherly
attachment to David out of respect for her
colleague, on his 8th birthday she reposted
photos shared by the father on popular photo
sharing platform, Instagram..