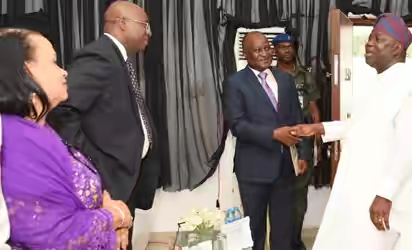 Lagos State governor, Akinwunmi Ambode, is certainly no stranger to televised interviews having featured in several before and since being elected into office. But when the governor appeared as a guest in the live recording for the maiden edition of Lagos Global on TV, it certainly elicited more than passing curiousity and interest. 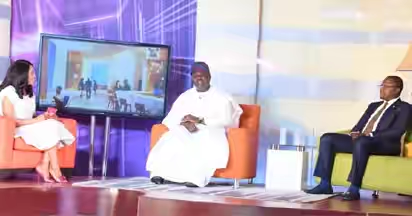 With an improvised studio setting inside the Lagos House Alausa Ikeja venue of the programme recording, Ambode was for over two hours virtually at the mercy of the television crew and the presenter as he responded to different questions while a studio audience, drawn mainly from the business sector, cheered or applauded as the interview session progresed.

Apart from the governor, the recording programme also featured as a guest, Professor Ademola Abass, the Special Adviser to the Governor, Office of Overseas Affairs and Investment. For the duo it was another opportunity to speak and further educate Lagosians, and indeed Nigerians, on what the administration is doing to realise its vision of creating an investment-friendly Lagos State, especially under the auspices of the Office of Overseas Affairs and Investment which the governor established May last year in fulfillment of one of his election promises.

Governor Akinwunmi Ambode (middle) with Prof. Ademola Abass (right) and Presenter, Temitope Oluseyi Oshin (left) during the maiden edition of Lagos Global on TV at the Banquet Hall, Lagos House, Ikeja.
Remarkably this is not a one-off opportunity as viewers will have the opportunity to hear and learn more, through the Lagos Global TV, of the numerous investment opportunities that exist in Lagos and what the government is doing to promote investment by creating the enabling environment. The new television programme, which will run for 26 weeks, will, for now, air on Television Continental, TVC, and Lagos Television, LTV.

Explaining the consideration that informed his decision to establish of the Office of Overseas Affairs and Investment, Governor Ambode said one of his priorities was to see “how to improve on the ease of doing business in Lagos and I also believe that we needed to carry out some kind of public sector reforms to drive the vision which we had actually set for ourselves and we needed to also have a kind of structure and institutional framework that would drive the vision.

The vision is very simple: we want a safer, cleaner and a more prosperous Lagos and one of the structures would be if we want to tackle the issue of bureaucracy in the civil service. And without actually competing with the Federal Government, we needed to find a place where our foreign investors, foreign business men will come in without going from one ministry to the other, … we needed to have a 24/7 one-stop shop office where we can drive investment, especially where our businessmen can actually walk into and get everything that they need. In going about that, we decided to come up with the office of Oversees Affairs and Investment, otherwise known as Lagos Global. It is designed to serve as one-stop shop to facilitate local and international investments.”

On his part, Abass informed that the TV programme to run every week is intended to help Lagosians know what the state government is doing in terms of how it is driving and generating investments and creating job opportunities. He added that though it will be showing for now on TVC and LTV, “by the grace of God by next year we will add another one or two channels” and will retain the current format of studio audience participation. He  explained that in the matter of ranking Lagos and Kano are critical, with Lagos having the edge. He buttressed this by informing that Lagos was recently pronounced the fifth largest economy in Africa. “So, it’s no longer a guess work; that means if Lagos today were to be country, we’re the fifth largest economy in Africa,” he said, adding that it presently has a Gross Domestic Product that is bigger than those of Kenya and Ghan