The name Aliko Dangote needs no introduction in
any circles. The wealthiest man in the black race as
at today and consistently so for a few years.

This excerpt from the book “The African Apostles ”
authored by Leke Beecroft tells a true story you’ve
probably never heard. This is a validation of
scriptures. 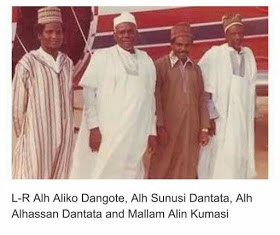 Born on April 10, 1957 in the then Northern Region
(Kano State) Aliko Dangote was born to
Mohammed Dangote and Mariya Sanusi Dantata. An
ethnic Hausa from Kano State, he showed his love
for business by selling sweets even in primary
school.

As a teenager, he began to work for his uncle, Sani
Dangote and it was said of him that he served
diligently. Sometime in 1977 and after his 20th
birthday, he approached his uncle and master and
told him about his plan to establish a business outfit
which would trade in cement, sugar, rice, pasta, salt, cotton, millet, vegetable oil and other products.
His uncle provided a loan of N500,000 but gave a
caveat to Aliko to return the loan within a deadline
of three-months(this was the practice at the time).
Dangote first of all relocated to Lagos in June 1977,
the commercial nerve centre of Nigeria, also, he then began to travel around Nigeria to develop a
strong distribution channel for the quick and
efficient delivery of his products.

A few years earlier, the Benin Airport had been
constructed. This served as one of his routes to the
Niger-Delta or South-South area of Nigeria.

Benin, formerly known as the City of Blood was
then experiencing a great revival through 39 year
old Benson Andrew Idahosa, a Bini man, who was
established as a young Christian in the Assemblies
of God and now pastored the Church of God
Mission. Idahosa who had recently returned from a missionary school in America had established
strong links with a number of pastors such as
Gordon Lindsay, Jim Bakker and T.L Osborn among
others.

Tommy Lee Osborn, one of the greatest evangelists
in modern times had first responded to Benson
Idahosa’s letters in 1962. Subsequently, a solid
relationship was established over the years
resulting in Osborn’s visits with his wife, Daisy to
Benin on a few occasions, either for his crusades or specifically to Idahosa’s Church.

Of all the visits however, one specific visit in the late
1970s was very unique. T.L and Daisy Osborn had
stayed late ministering at the Miracle Centre of
Church of God Mission just opposite the Airport.
They therefore went late to catch their flight to
Lagos which was supposed to be a connecting flight from Johannesburg to France, England and
then the USA.

By the time Idahosa took his guests to the airport,
they were told that the last flight for the day was
overbooked. Not one seat was available, the
passengers had boarded and the flight about to
take off.

Not only that, the jetliner had begun to taxi
towards the runway. Benson Idahosa”s new
mercedes sped towards the tarmac and screeched
to a halt in front of the plane. Benson Idahosa came
out and waved at the pilot frantically.

The plane stopped and the steps were lowered as
the pilot came down to know what the issue was.
Idahosa began “I have two of God’s important
servants who must go to Lagos”. “But we are
loaded to capacity. Every seat is full” said the
captain. “Never mind.

Let me on board. They all know me; they see
‘Redemption Hour’ (Idahosa’s TV program).

Let me talk to them”. Idahosa obliged, climbed into
the plane and walked down the crowded aisles.
The passengers were annoyed. He prayed silently
as he returned to the front. He turned round , facing
the passengers and started “Excuse me friends, I
have two of God’s special servants in my car. They must go to Lagos today on this plane. Two of you
will get off now so God’s servants can board. God
bless you. He waited a minute, no one moved. The
silence showed annoyance by the impatient
passengers. Some pretended to be asleep and
others it seemed were praying. Idahosa slowly walked the aisle again. As he approached the rear,
a young man rose from the back of the plane and
asked the person sitting next to him to get up. Yes,
said Idahosa pointing, you can go tomorrow. You
can travel later he said, pointing to the other man.
They both gathered their belongings and proceeded from the plane.

Benson Idahosa stopped the first man in in the aisle
of the plane. He asked him “youngman, what is
your name and what do you do?

“My name is Aliko Dangote and this is my assistant”
the young man replied. “I am a trader, a
businessman”. Impressed. Benson Idahosa
responded

“The World will get up for you” the mostly Christian
passengers responded “Amen”. “My God will bless
you! God will take you and your business beyond
Africa and bless you beyond measure”.

Just before descending the steps, Idahosa turned
and raised his hands with tears in his eyes, praised
the Lord and blessed the remaining passengers for
their patience. They all broke out in spontaneous
clapping. See you on ‘Redemption Hour’ this
Sunday evening he said. They clapped as T.L and Daisy Osborn boarded for the subsequent flight.

The world has since stood up for that twenty
something year old man.

Today, Aliko Dangote is a Nigerian
Billionaire ($18.6Bn networth) presently the 67th
richest in the world (23rd in 2014) and richest in
Africa. He flies one of the best jets in the country.