“I Am Unapologetically Sold Out To Jesus:” The Relationship Between Jenifa And Toyo Baby! UNCENSORED 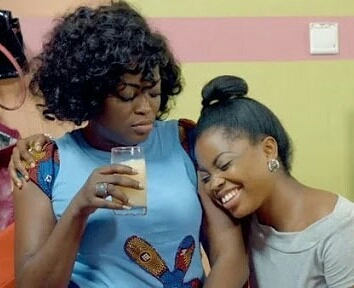 Olayode Juliana popularly known as Toyobaby  finally revealed the relationship between her and funke. She said

​Thank you for choosing to read this post. It hurts when people spread lies about you and you cannot do anything to defend yourself. But thank God for a platform like this. I would be saying a lot of things; it would be a long read but I promise you would enjoy reading.

I would be stating in clear terms the relationship I had with Aunty Funke. I used ‘had’ and would be talking in past tense because like you know, I am presently not on the Jenifa’s Diary series. And guess what? The news just broke lately, but I have been off the series since May,2016 (last year); it’s been over a year already.

My post would be in two parts; who Aunty Funke was to me (Juliana), and then, who I was to her. These are things only few people know but I am ready to let the world know.

Yes! I will start with her. Why? She’s an amazing person and I can’t wait for you to know how lovely she is on a one-on-one basis. We all have our flaws but we choose rather to celebrate our strengths. Here goes!

Aunty Funke met me for the first time at the auditions of Jenifa’s Diary (she did not know me prior to that day). She saw my talent and believed in me. I worked with her for years; she trained me and helped me in becoming a better actress. She would not take anything short of excellence from her cast. I honestly have not seen anyone in Nollywood more hard working than Aunty Funke. And she made it a duty to correct me and coach me on being better.

Aunty Funke helped pay my mum’s hospital bill for a fibroid surgery, two hundred and fifty thousand naira (N250,000), because I had no money at that time. She also gave to the ministry dear to my heart, MINE Teenage Ministry when we were preparing for an event, one hundred thousand naira (N100,000) and my pastor called to appreciate her. So apart from my pay as an actress on the series (which I won’t mention), that’s all I received from her money-wise, asides from change she gave me for transport when leaving set because as at then, I used to jump bus, ‘keke’ and bike to and fro set up until I left the series…lol. But in all, God used her to meet that major need in my life at that time.

I fondly remember the times Aunty Funke would call me to her room while I was staying in her house (during set), and talk to me. She would take her time to advise me and encourage me as regards life in general. One particular day I treasure was the day she came to the room I stayed and told me, in a mother’s tone that I was beautiful and she warned me sternly never to bleach. I smile whenever I remember that. God bless her kind heart!p

Aunty Funke never ceased to celebrate me. Knowing how excellent she is at what she does (acting), I was shocked, elated and excited all at once the day she told me I was a good actress. She told me I would be great and celebrated. She saw years ago what is happening today. I am thankful for her words.

I was privileged to be the one holding Aunty Funke’s bag while on set. I ‘kept’ the money we spent on day-to-day running and was required to balance account afterwards. I don’t like Mathematics, so that was a lot of work…lol. Money was never unaccounted for in my keep. I ran errands for Aunty Funke and made sure all that was needed was supplied.

On set, on some occasions, when I was not acting, I was fanning and dabbing the faces of other actresses (including extras). So, this is for those that have accused me of being proud. Please ask those I fanned and dabbed while preparing to go on set later. On some occasions, I also did my own makeup and that of some other cast. All I wanted to do was SERVE; I wanted every set to be a success.

On set, there were different occasions I served cast and crew (plus extras) food and water. At some points, I joined in washing plates when the plates were not enough to go round. And times I was not acting, and I saw the ‘Mamas’ needed help, I joined them in washing plates. They are alive to bear witness.

I hardly forget things I memorised, so I knew the continuity of major characters on the set. Aunty Funke used to ask Costumiers to confirm costumes with me. On some occasions.I had to go to set earlier than others and leave later than others to sort out costumes, including wigs and other accessories. I looked forward to doing it and never once complained

I could not drive while on Jenifa’s Diary set, and I still cannot…lol but I woke up early on different occasions to wash Aunty Funke’s car. The times I didn’t wash, I dusted the car. She is a neat person, so I made sure the inside of the car and the boot were tidy and clean. For me, it was pleasure serving Aunty Funke.

I lived with Aunty Funke while set was on, so I counted it my duty to clean the house. She lived in a duplex at Chevron at that time, so I cleaned the entire house. Sweeping and moping from room to room. Scrubbing bathroom after bathroom. I arranged wardrobe after wardrobe, laid one bed after another. You would not know any of these if I am not saying this. I did all this with joy. She was special to me and you serve those you love.

Aunty Funke is neat and very tidy and she does professional drycleaning. But there were times she needed a dress washed urgently and I helped her wash. Please don’t accuse me of being proud or rude to Aunty Funke again. I SERVED her WHOLEHEARTEDLY.

Some of my fond memories with Aunty Funke are the times I cooked for Aunty Funke. I enjoyed cooking for her. I followed someone who lived with her then (name withheld) to market on different occasions to buy things we used to cook. Please note, I had a home of my own. I stayed with Aunty Funke only when we were shooting except times she specifically asked me to come over.

I learnt how to massage with Aunty Funke; I learnt on the job…lol. I knew she was usually tired when we got back so it was my pleasure to relieve her; she sometimes slept off while I massaged her. There was a day we were on location and we did not take the oil. Someone offered oil but as I held it, my spirit was not at peace. So, I bowed my head and prayed over the oil. I did not know Aunty Funke was watching me. When I opened my eyes, she asked what I did and I told her. Her response was“O se oko mi”, translated, “thank you my dear”.

There were different times Aunty Funke called me to pray on location, and sometimes at home. There was a time I gave her a Word of Knowledge. I had a dream once, I told her, and it happened the next day. I fasted and prayed with Aunty Funke and her sister. She called me to pray with her at midnight at some points. She knew from the onset that I was a Christian and that I was committed to prayer. There were different times we both prayed and asked God to give us sponsors. So, for those that have accused me of being “holier-than-thou”, that is the real me o! Everybody on every set I have gone, including Jenifa’s Diary, know I am unapologetically sold out to Jesus. I am not ‘deceiving’ anybody. That is my ‘real face’…lol

I had the pleasure of sitting and gisting with Aunty Funke at different points, whether at home or in the car. We would talk about the script. She sometimes had inspirations in the car and she would ask me to write it down so she doesn’t forget, and she would ask my opinion. I treasure those moments. Interestingly,there was a day we were talking at the house and her husband was there. I talked about loving High School movies and Musicals. I said I wondered why we didn’t have such in Nigeria. Then, we all started talking. JJC Skills even ‘drafted’ me into it already but we were just talking lightly. It is my joy that “INDUSTREET” is a reality today!

Let me stop here! So, with these few points of mine, I hope I have been able to convince you and not confuse you that you shouldn’t believe everything you read until you hear from the source.

Your question now is, what happened? Hmmm! We had a misunderstanding and I cannot disclose what happened without Aunty Funke’s permission. But if you read all I said in the post, you would gather that we were quite close. And when two people get that close, misunderstandings are bound to occur.

So, it is God, who saw my faithfulness and commitment, Who is rewarding me and announcing me to the world. Dear aspiring celeb, please SERVE and not seek to be served.

Please do well to share this post on your social media platforms via the buttons beneath this post so we can spread the TRUTH of what went down. My name has been tarnished by liars and bloggers seeking traffic. God have mercy on them!

I would be posting personal things on this blog. Please visit often or better still, follow via email, so that my new posts would land directly in your inbox. Tomorrow, I would telling you aboutTHE FIRST DAY I WAS NUDE ON SET. To get that gist directly, please click the ‘follow by email’ button and subscribe.

Whew!!! This was long! Thank you for reading and allowing me pour out my mind in love. I am just a human being who does not want to be maligned falsely!