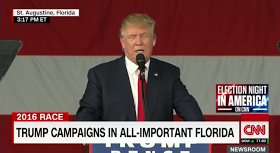 “The Investors (Business) Daily poll, which was the single most accurate poll for the last three cycles. The last three presidential races. We’re up. We just went up. We were down three. We were down five. We’re now two up in Rasmussen. Just came out this morning. We’re up in another couple of polls,” Trump said.

However, the majority of national polls show Trump isn’t leading.

A new ABC News/Washington Post poll shows Clinton with a 12-point lead over Trump among likely-voters.

Trump also told the crowd in Florida he was leading in key states.

Trump’s campaign manager Kellyanne Conway revealed over the weekend that Trump was behind and said Clinton’s big name supporters such as Obama and Bill Clinton is responsible for her position in the polls.

“We are behind. She has some advantages,” Conway told NBC’s “Meet the Press,” adding that Clinton “has a former president, happens to be her husband, campaigning for her; the current president and first lady, vice president — all much more popular than she can hope to be. And she’s seen as the incumbent.”

“Let me tell you where he’s behind. He’s behind in Pennsylvania, slightly. He’s behind slightly in Michigan. There’s these blue states Mr. Trump is putting into play where we get zero credit for doing so,” he said. “We’re leading in places like Iowa, which has been blue the last couple of cycles. We’re leading in Ohio. We’re probably a tied race in North Carolina. We might be slightly ahead there. In Florida, I believe we’re within the margin in that state. We’re ahead with absentees at this moment.

: “We believe we’re winning this race. Mr. Trump said that in his very last rally that he was in. That’s the real reflection of where we are as a campaign.”