I Don’t See Any Election In 2019 – Apostle Suleman 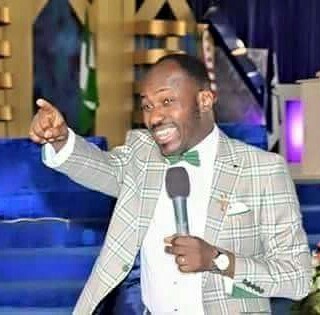 Firebrand preacher and president of the Omega Fire Ministries worldwide (OFM), Apostle (Prof.) Johnson Suleman, has urged Nigerians to pray for the country as politicians prepare toward the next general elections which comes up in the next two years.
Apostle Suleman is renowned for his divine-inspired healing power and teaching prowess and he radiates confidence even in the face of vague criticisms that often trail such prophetic gifts like his.

The servant of God whose many past prophecies had come to fulfillment, including his December, 2016, warning that some forces would alienate the Vice President of Nigeria, Professor Yemi Osinbajo (SAN) and make attempts to remove him from office, told journalists after last Sunday service in his church that ‘except prayers are made, I do not see any election in Nigeria in 2019’.

Apostle Suleman is credited for many precise prophecies made in years past. The acclaimed ‘Oracle of God’ is the first pastor in Nigeria that prophesied in a December 2013 prophecy, the crowning of former Central Bank of Nigeria’s governor, Alhaji Lamido Sanusi Lamido, as Emir of Kano.

Apostle Suleman foresaw the death of a serving cabinet member in Nigeria and asked for special prayer during a church service in January 2015. Likewise, during his ministry’s ‘Fire and Miracle Night’ programme in August 2015, the servant of God foretold the trouble in the last Kogi State governorship election that brought in Governor Yahaya Bello and warned of ‘a death’. Also, as Edo State prepared for the September 10th 2016 governorship election, Apostle Suleman at a church service said he did not see the election holding on the appointed date. Subsequently, the INEC shifted the election to September 28th 2016, citing security challenges.

“I see presidents being removed in Africa and presidents being installed’, the man of God declared in his 2016 prophecies. In that declaration, Suleman also asked for vigilance as he said he saw kidnappers entering schools; that President Buhari’s health needed serious attention; that America and China would have major crisis, and more.

“Tell Nigerians who wish to see democracy sustained, to pray for our leaders and work for peace; tell the leaders too to pray and be honest with the people they are serving, otherwise, elections may not hold in Nigeria in 2019. That is what God has shown me,” Apostle Suleman stated during the media interaction.

Apostle Suleman and his OFM team are presently in Paris, France, for a two-day restoration crusade tagged ‘Help From Above’, which was started on Tuesday 19th and ended on Wednesday 20th of September, 2017. The man of God who just concluded the Dubai edition of ‘Help From Above’, proclaims that “this is another season for restoration, miracles and undiluted revelations for God’s people all over the world.”