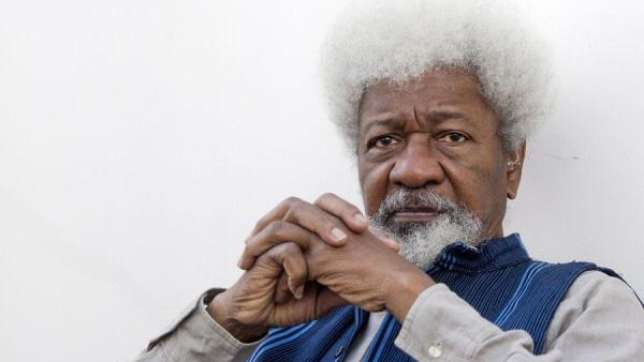 Nobel laureate on Saturday, came hard on those asking him to tear his US Green Card as he vowed to do once billionaire businessman, Donald Trump, won the US presidential election.

Online commentators have been daring the revered playwright to carry out his threat which he reportedly made few days before the election since Trump had won.

But Soyinka, in a statement he signed titled, “Red card, green card- Notes towards the management of hysteria”, described the online commentators as “noisome creatures” whose ignorance resonates largely on whatever they comment on.

He said, “Let me end with a Red Card to those noisome creatures, the nattering nit-wits of Internet: maybe Trumpland is not as despicable as the Naijaland you impose on our reality from your secure cesspits of anonymity.

“Go back to school. Your problem is ignorance, ignorance of whatever subject you so readily comment upon. Learn to study your subject before opening up on issues beyond your grasp.

“Sometimes you make one feel like swapping one green for another, out of embarrassment for occupying the same national space as you.”

Soyinka maintained that he would carry out his threat but not at a time fixed by his critics.

He said, ”If it even becomes convenient to bring it forward, I intend to do so, but please don’t come at me with plaints of time imprecision.

“I never discussed it with you, nor invited you to a private decision whose execution was already in the making.

“Do not try to browbeat me. It’s a waste of time – all you have to do is immerse yourselves in my antecedents. It will not attempt to deal with the notion of an exit time-table as conceived by others.”

The scholar-critic, who also narrated why he decided in the past to issue a ‘Red Card’ to countries such as Australia, China, South Africa and Cuba, added that the decision on his US green card made while addressing a group of students at Oxford University was not a public lecture.

But the leader of Igbo group in Oyo State, Dr. Alex Anozie, on Saturday, pleaded with Soyinka, not to tear his US green card simply because Trump defeated Clinton in the just-concluded US presidential election.

Anozie in a statement, appealed to Soyinka to shelve the plan, reminding him that Trump’s victory was the decision of the American people and that Clinton had already conceded defeat.

He said, “Many people expected Clinton to win but it eventually did not go the way many had expected. The prophesy of a respected Nigerian prophet also failed on the election.

“Now that Americans have spoken, and with Clinton congratulating Trump, Soyinka should follow suit, he must not tear his green card.