“I Said The Christians Must Not Go After Them, But If They Come After Us, Then Defend Yourself” – Apostle Suleiman 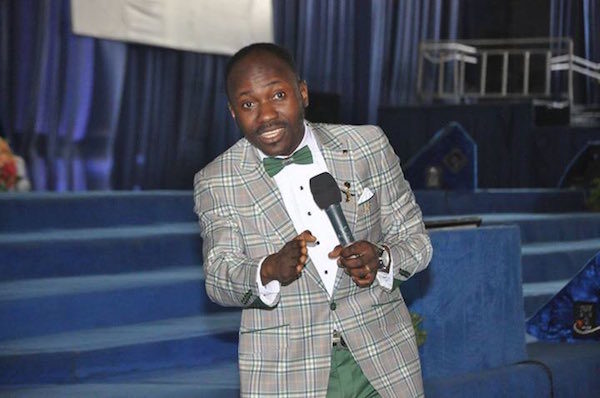 Senior Pastor of Omega Fire Ministries (OFM) Worldwide, Apostle Johnson Suleiman, has said that he did not instruct Christians to go after Muslims, adding that his statement was taken out of context.

A couple of days ago, a video surfaced online where he told his Church members to “kill any Fulani herdsman” who enters the church to cause harm.

Following the message, operatives of theDepartment of State Services (DSS) in the early hours of Tuesday stormed a hotel the clergyman was lodged in Ado-Ekiti after his crusade, to arrest him.

Vanguard reports that a Director in the hotel, who pleaded anonymity said when the DSS arrived the Hotel, they told the receptionists that they had a message for the Apostle from the Presidency.

The receptionists passed the message to the Apostle’s Personal Assistant and his Security details who informed their boss of the mission of his guests.

The Director added that a few minutes later he saw a convoy drove into the hotel premisesand Governor Fayose emerged from one of the vehicles in the convoy, went straight to the preacher’s hotel room and left with Apostle, who had got his bags already packed.

Speaking in Ado-Ekiti on Wednesday, Suleiman said that he preached on the need for Christians to always defend themselves, adding that it was sinful to tell anyone to kill God’s creation.

“They said I preached in Auchi two weeks ago which they said implied that I was instigating Christians against Muslims. I have always been an advocate of peace and I can’t stay around and be saying such. There are widows and orphans for us to take care of just because of these senseless killings, no leader will see his sheep being killed and be happy.

Later, I got anonymous calls from Fulani Herdsmen about what I said. What I said was that, if gunmen came around church to attack churches, you must defend yourself, but if they come to pray, don’t attack. But they quoted me out of context. I am not stupid, I live among the crowd and I am not senseless. Time for self defence has come. Whether you are a Muslim or Christian, someone can’t just come to your house and kill your children and you will keep quiet.

I said the Christians must not go after them, but if they come after us, then defend yourself. This is what they twisted. I am hearing different versions of the story. I was in Abuja for three days why didn’t they come after me. But now that I am in Ekiti, they wanted to lump me up with a man they think was against them. It could have been easier to pick me up in Abuja, I don’t live here.

If this will make them to clarify what I meant, I can present the video of my preaching. A town in Aviele in Edo State, Muslims rushed into the church and chased away all church members and started calling for Islamic prayers there. I have always been preaching that youths must not kill. It was even wrong for the police or security agency to be coming around me and be saying I preached that I said Christians should kill Muslims without any verifiable facts.

The only thing I am seeing is that we must learn how to investigate. I am not happy because of the way Christian community have been reacting. They are even saying they will protests abroad in all Nigerian embassies. I will never be alive and see Christians destroying property of Muslims because there will be problem.

If they had called me and say I should tone down what I said, I would have gone back to do that. I have never been invited, but if I am invited I will come but that will be at my own time. I was not stopped from preaching.

This Kaduna crisis confirmed that there was deliberate attempt to frustrate Christians. The National Assembly must not fold their arms and see this happen. But I have no grudge against Buhari or DSS. They are only doing their job, but the DSS did it wrongly,” Suleiman said