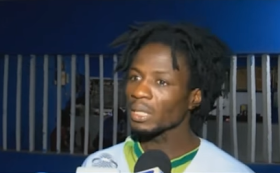 9 year old Korede Taiwo who was rescued from
the Celestial Church of Christ (Key of Joy Parish), in
Ajibawo area near Otta in Ogun state where his
father, Prophet Francis Taiwo, chained him for
weeks because of his stealing habits, says he stole
because he was hungry and that he had not been well fed for four months.

“I steal because I am hungry. I have not
been fed well for four months. They give
me food but not all the time” he told
Channels TV

When interviewed, his father Francis said;

When I complained to my shepherds
about his stealing habit, they advised I used
different methods but it didn’t work. I now
decided that maybe if I chain him down I
will find a solution”he said.

Korede is currently in custody of the Onipanu
Police station in Ogun state.