‘I Support A Restructured Nigeria’ – Pastor Bakare Addresses The Nation 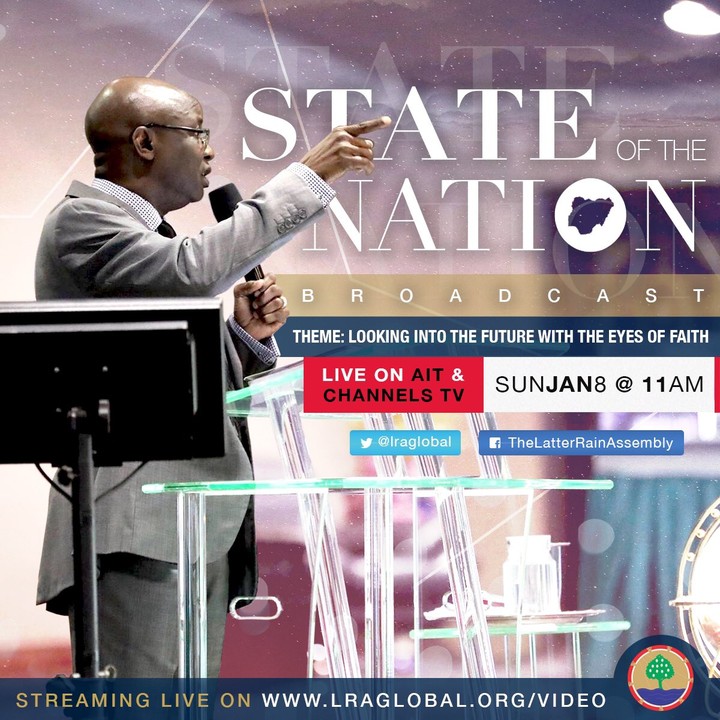 Highlights from the State of the Nation Address – Looking Into the Future with the Eye of Faith by Pastor Tunde Bakare of the Latter Rain Assembly Ikeja, delivered on the 8th of January, 2016.

From variations of ‘chanji’, to the conflation of ‘change’ and ‘recession’, few, have been immune to exclamations of discontent 2016. The way forward is not so complex for those interested in genuine change. The confusing and discriminatory multiple dollar to naira exchange rates must be discarded. A more reliable exchange rate, mutually beneficial to our people & economy & attractive to foreign investors, should be put in place.

Prohibitive and punitive interest rates must be lowered in order to liberate the creative ingenuity of our people. Propelled by love for our nation, and driven by a desire to see this government succeed, we come with additional propositions in 2017. Upon this premise, our quest for solutions must begin with an honest appraisal of where we are in readiness for where we desire to be.

“On corruption, we have seen some progress in the anti-corruption war” From being dubbed “Sin-galore” after Independence in 1959, to being ranked the seventh least corrupt state in 2014. Singapore’s upward trajectory provides a compelling contemporary case study. As Nigerians know too well, winning an election is one thing; governance is another kettle of fish.

How did Lee Kuan Yew’s visionary leadership transform Singapore from a by-word to a gold standard?

1. He used the existing (CPIB) to “(launch) a vehement campaign against bribery and graft”.
2. He took responsibility for creating his own raw materials to override constraints, as all visionary leaders do.
3. He demonstrated grit, single-mindedness, boldness & consistency in overcoming significant challenges.

Lee Kuan Yew was “completely incorruptible, and chose people who were incorruptible,” Nigeria does not have a peculiar problem that has not been solved before, we cannot continue to treat cancer with Panadol. “If we are fighting corruption, let us remove the kid gloves; if we are diversifying the economy, let us make tough choices” “If we are confronting insecurity, let us also address the systemic issues that make it possible in the first place.”

A national vision must possess the following qualities:

1.It is given by God to those who are burdened with the destiny of their nation whether or not they are in government.
2. To access the vision, such nation builders must heed the call to ascend above the perversity of their environment
3. A national vision is crafted against the backdrop of an accurate definition & assessment of the problems & challenges plaguing the nation
4. It is bold and audacious to the extent that only the faith-inspired can conceive it
5. A true national vision is not only accurate, it is broad and panoramic, encompassing the varied dimensions of the landscape
6. A national vision is documented, hence the admonition, “write the vision”
7. The essence of a national vision is kept plain and simple for all citizens to understand and imbibe
8. A national vision has a clear communication strategy that ensures that everyone “reads” it.
9. A national vision must galvanize and inspire corresponding action among the citizenry.
10. A national vision is time delineated; it must be long term, such that it is aspired to or waited for

Currently, we have a government that is led by a man who desires the best for Nigeria and is doing what he deems best. For a relatively long time, the government failed to effectively communicate its direction as encapsulated in the “Change” agenda. Due to the communication gaps and poor mobilization, there has been insufficient corresponding action by non-state stakeholders. After a slow start the current government has created laudable medium term plans for socioeconomic growth and recovery.

However, it is yet to demonstrate the audacity and courage required to address the foundations of the Nigerian problem. A critical factor that will determine the success or failure of the government and its plans. That factor is the restructuring of our nation. The inquisitive may ask: “Why must we restructure?” We must restructure to correct the flaws in our federal system.

Our founding fathers agreed that Nigeria would be “a truly federal state with limited & specific powers allocated to the federal government. This agreement was the social contract upon which the Nigerian state was formed. This social contract was broken on May 24, 1966 through the Unification Decree by Gen. J.T.U. Aguiyi-Ironsi’s administration.

Today, we have 36 Ministries and 36 Commissioners for Education which, consume a huge chunk of the limited education budget. Imagine how much we could save with six efficient and effective ministries in education and other relevant socioeconomic sectors. These 36 states should, become districts headed by Mayors within the framework of 6 geopolitical zones.

I am inclined to a zonally structured governance system… Let the Nigerian people decide. For us at the Latter Rain Assembly, we have accepted responsibility for our nation and that is why we do what we do. As watchmen over our nation, we are propelled by our God-given vision of the New Nigeria, a nation on a journey to oneness and greatness. We seek Nigeria’s transition from 36 states to 6 geopolitical zones that will become harbingers of a united nation.

It is time to build a well-ordered nation with strong institutions dispensing justice. It is time to arise with patriotic zeal to build a great nation such that. May 2017 be the year we look into the future with the eyes of faith and take steps to accomplish all that we know is possible.

“Thank you for listening; God bless you, and God bless Nigeria.”