“I Want To Be The Next President Of Nigeria” – Fayose 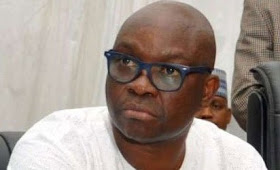 Ekiti state governor, Ayo Fayose, says he will run for president in 2019. Fayose disclosed this when he spoke with journalists in Ado-Ekiti, the state capital on Friday. He said:

“I have defeated two incumbent governors in two different attempts. So, defeating the All Progressives Congress in the coming presidential election would be a walkover. Many did not believe that I can come back as governor of Ekiti State after eight years. I don’t know how God did it. This time, I am going to the presidency. God is taking me there but I don’t know how. I have penchant for taking powers; that one in Buhari’s hand. I would take it. I’m going straight to that Villa. I’m the next president. I want to be the next president of Nigeria. My own won’t be this change that has brought nothing. We are going to represent the people well and tell them the truth” he said.

Do You Think He Will Win?