” I Warned Keshi, Wrote A Letter To Him” – Prophet Ayodele 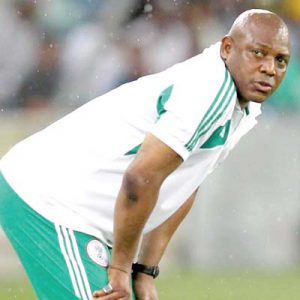 Spiritual head of INRI Church, Primate Elijah
Babatunde Ayodele, who like other Nigerians
is still writhing in pains over the death of
former Super Eagles coach, Stephen Keshi has
disclosed that he warned the soccer legend to
seek the face of God after the AFCON 2013 Nations Cup.

Ayodele in a telephone chat with Daily
Sunsports said he wrote Keshi a personal letter
after the South Africa 2013 Nations Cup
campaign to intimate him of the divine
revelations he got.

“I have been in deep pains since I learnt of
his death. Keshi was a soccer icon. He
served Nigeria well both as a player and as
a coach. I remember writing him a personal
letter after the Nations Cup in South Africa
and warned him to seek the face of God. He needed prayers and I told Nigerians then
that Keshi has completed his assignment
with the Eagles after the Nations Cup and
that Eagles needed another coach to move
forward.”

Ayodele urged Nigerian football buffs not to
dismiss divine revelations, even as he insisted
that the country does not need a foreign coach
ahead of the Russia 2018 World Cup qualifiers.

“I have sent messages to the NFF and I hope
they will listen. I have told them the Abuja
Glass House needs some spiritual cleansing. On
the Eagles, I have made it clear that what the
Eagles need now is not a foreign coach. This is
what God revealed to me. I m not saying it to attract publicity or for any financial gain.

Let Pinnick Amaju and his board look inwards
for a coach. From what God has revealed to
me, an indigenous coach will not only qualify
the country for the World Cup but take the
Eagles far in the competition in Russia.
Bringing a foreign coach will be a disaster. They shouldn’t waste money on a white man,”
Ayodele said.

The man of God warned that the present
leadership crisis rocking the Nigeria Football
Federation (NFF) should be resolved fast as it
could see the country’s football be grounded
on all fronts.

“The crisis is not good for our football. If it is
not resolved everything will be at a stand still
and most of those sponsoring the game will
pull out. There will be no money in NFF and the
country will stop doing well. I just hope the
gladiators will seek the face of God and know that the country’s interest and that of our
youths should come first.” On the domestic
league, Ayodele said the League Management
Company (LMC) could face litigation challenge,
even as he warned that 3SC, Lobi Stars,
Enyimba, Warri Wolves and Sunshine should pray not to run into a financial crisis that could
lead to their disbandment at the end of the
season.

“I see these clubs facing big financial problem
that will affect not just their technical crew but
the teams themselves. They need to pray to
end the season without any crisis. Enyimba in
particular can rule Africa again if they avoid
management and players conflict. I see some confusion in the team and that could affect
them psychologically. If they avoid this and
pray together as a team they will make it this
year.”