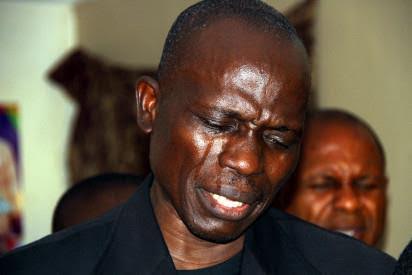 Elijah Olawale, the bereaved husband of RCCG
evangelist, Eunice Olawale, who was murdered
while she was preaching at Bwari, Abuja on
Saturday July 9th, said he warned his wife about
preaching in the morning two weeks ago.
Speaking with The Sun, Elijah said

“About three weeks ago, my wife went to
the back of my house. That morning, after
preaching, she came and told me that a
man in the mosque heard her and called on
people to listen to what she was saying.
When she came back and told me about it, I warned her. I did that because I was a
Muslim before I converted and became a
Christian. I told her to be careful. I told her
that although what the man in the mosque
said was commendable, she needed to be
careful. For about a week, she did not go out to preach because of the warning. That
was about three weeks ago that I warned
her. The comments made by the man in the
mosque were not against her. In fact, they
were commending her.”he said

Elijah said his wife was the breadwinner of his
family.

I am a pastor, and a pastor depends on
what God gives to him. Sincerely speaking,
my wife was the breadwinner of this home.
That is the truth. She sold things to take
care of the house. She was the one God
used to take care of this house. In the past, I was into business. But my wife and I
agreed about two years ago that I needed
to face the ministry since the business was
affecting it. She said I should be fasting and
praying for people. She was the one who
paid the school fees and took care of other things. My wife always went out early in the
morning for the ‘Morning Cry,’ to preach. On
that fateful morning, she went around
5.30am and I was still in bed because we
had a vigil overnight. She participated for a
while and slept because she was going out to preach in the morning. Two of my boys
are footballers, so they went to the field to
play. And when they came back, they told
me that they heard some footballers saying
that they butchered a woman preaching
early this morning. So, when I heard this, we trekked down with the short I was
putting on and we did not see anybody,
but we saw blood on the ground. I asked a
policeman around and he said it is true but
that they had taken her to Phase 4 Police
Station. I went to the station with my children and when we got there, I saw the
lifeless body of my wife at the back of the
police van and there, she was taken to the
mortuary. The incident happened between
5am and 5:30am because she usually went
out by 5am and came back by 6am. I fell down when I saw the body of my wife
covered. I cried. I was too tired and could
not drive back home. Someone had to drive
us back to the house”he said.