‘I Will Not Destroy My U.S. Green Card Yet’ – Wole Soyinka 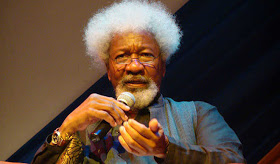 Nobel laureate, Professor Wole Soyinka, says he will not be tearing his green card yet. According to him, everyone should wait until Donald Trump is inaugurated as the 45th President of the US on January 20th. Nigerians on social media yesterday called on him to fulfill his promise to destroy his green card if Trump is elected President. He pledged to do this when he gave a seminar at Oxford University two weeks ago.

However in an interview with The Newsweek yesterday, Soyinka who lectures in some Universities in the US, said Nigerians should wait until when Trump assumes office to see him take a decision.

“Why don’t we wait until Trump actually takes office? I am just going about my normal commitments, but definitely not getting into any more commitments. Let’s put it that way for now,” he said. He expressed fears that Trumps victory will affect the US government’s support to Nigeria in the fight against Boko Haram “One should expect that level of collaboration to diminish. Trump’s mentality is one of, ‘What are we doing there? What business do we have over there? I foresee Trump dismissing that kind of expectation offhand and closing in, shrinking, becoming smaller in terms of [the U.S.’s] presence in other parts of the world,” he said.