‘If You Obey God, You Will Never Be Broke,’ TD Jakes Says 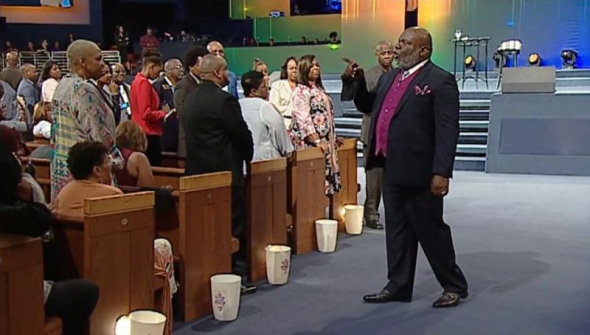 Popular megachurch pastor, Bishop T.D. Jakes of The Potter’s House in Dallas, Texas, sparked a furor online Sunday when he told his 2.8 million followers on Twitter that if they obey God, they will never be broke again.

“If you obey GOD you will never be broke another day in your life. #AndItCameToPass #tphonline,” a post on Jakes’ Twitter account said at 11:04 a.m. on Sunday.

The Christian Post reached out to The Potter’s House on Thursday to verify if the tweet was made by Jakes himself or an account administrator but no one was available.

On Monday, critics began questioning the biblical genesis of the statement and Jakes responded: “David said, ‘yet have I not seen the righteous forsaken, nor his seed begging bread.'” 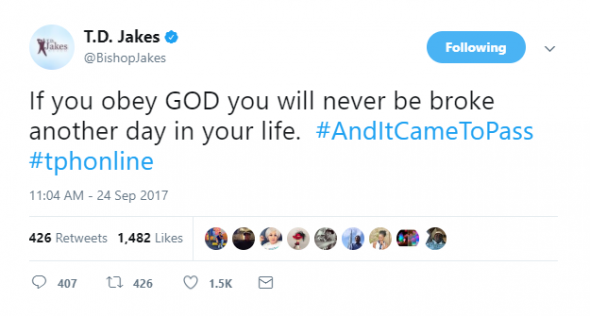 Trillia Newbell, director of community outreach for the Ethics and Religious Liberty Commission for the Southern Baptist Convention, said the statement by Jakes was a “falsehood” that made her cry.
“I’ve never cried over a tweet, until today. 2.7 million people potentially saw this falsehood. This is why we preach the gospel,” she tweeted Wednesday.

Author Leah Yehudah, who recently released For a Sign and a Wonder: Handy Scriptural References to Aid the Newly Awakened Israelite, agreed with Newbell.

“Bishop Jakes, I respectfully disagree. As does Hebrews 11:35-39. Obeying Yah does not guarantee that we won’t ever be broke. #falsedoctrine,” she wrote in reply to the bishop.

Jakes has long been associated with the prosperity gospel movement, also known as the Word of Faith theology. It teaches that the power of the Holy Spirit can be put to use for whatever the believer wills and that God blesses those he favors with material wealth, according to The Washington Post