“Igbos Will Lose More, No Hausa Or Yoruba Has Property In Igboland” – Fr. Mbaka 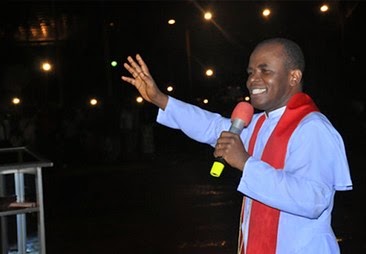 Fiery Enugu-based Catholic priest gave his views today on the current agitation for the secession of southeast Nigeria from the rest of the country as the Republic of Biafra.

Addressing a gathering of Igbos in East London, the controversial cleric said that Igbos should be the last people seeking to leave Nigeria. He said:

Mbaka implied that Igbos had the most to lose by the breakup of the country. He claimed to know about how much Igbos owned across Nigeria because he was regularly being invited to to say blessings at the opening of new businesses by Igbos, especially in northern Nigeria. He said:

“Go to Sabon Gari in Kano and see what Igbos own there”. He added that Igbos could complain that they were not enough of them in government, but under former president Goodluck Jonathan, an Igbo was finance minister, Central Bank governor, and so on.

He went on to suggest that those Igbos that have been seduced into agitating for Biafra by Nnamdi Kanu, the leader of separatist group Indigenous People of Biafra (IPOB) are “the children of the poor”, who in his view, are not thinking properly about the implications of secession. Mbaka said those people were being deceived by Kanu.

He was very convinced that fault lines between different Igbo communities would come to the fore if Biafra ever became reality.When challenged on talking about politics, Mbaka responded that “politics is part of life” and “I read political science and political philosophy”. He added that decisions made by politics affect everyone.