I’ll Leave Nigeria Better Than I Met it — Buhari 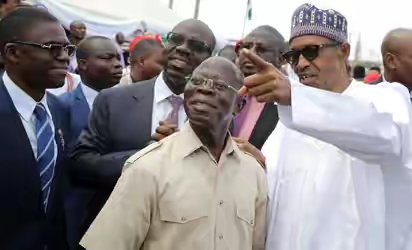 BENIN—PRESIDENT Muhammadu Buhari has vowed to leave Nigeria a better nation than he met it, urging the various ethnic groups in the country to maintain unity and assist the nation become greater again.

President Buhari with L-R: Edo State Deputy Governor Elect Hon. Philip Shuaibu, Edo State Governor Elect Godwin Obaseki and Governor of Edo State Adams Oshiomole shortly after commissioning Upper Siluko Road during his visit to Edo State for the Commissioning of Infrastructural Projects in Benin City on 7th Nov 2016
The President lamented that the nation made some grievous mistakes in the past by her over dependence on oil, saying, “that is what we are paying for today as a nation.”

President Buhari, whose two days working visit to Edo State ended yesterday, emphasized that his administration had made tremendous success in the three key areas he promised Nigerians; security, economy and fighting corruption, irrespective of the view of opposition about his administration.

He said: “I am not deterred over such criticisms because I am focused and I am happy that many Nigerians have started realizing what we are doing and trying to do, to fix this country for the better. Our problem as a nation started when we abandoned agriculture, our hides and skins, cocoa export, palm kernel and engaged in oil business.

Once petroleum was discovered and developed in large quantity, we threw everything to the dust. Now petroleum is diving from 100 dollars to between 40 and 50 dollars per barrel and that is the price we are paying now. What have we done to our agriculture, power, rail, road and social infrastructure; education and health? Just check and find out.

“We have been wasteful. Now, we have to go back to the land, to solid minerals and do a lot of savings so that we can leave a better country for our children and our great nation.”
President Buhari, who insisted that God had always saved the country from collapse, noted that “if the rainy season had failed this year, especially, in the Northern part of the country, I wonder what the future would have been because there were no savings, there was no infrastructure, coupled with hunger. I think it is a big recipe for disaster. We thank God for saving us from that disaster.”

He commended the out-going governor of Edo State, Comrade Adams Oshiomhole, for what he described as his foresight, hard work and the integrity which he exhibited in the past eight years, expressing optimism that Oshiomhole would work for the nation when he left office as governor.

Earlier, Governor Oshiomhole who thanked God for the achievements in the past eight, said the Edo University, Iyahmo, was built to offer quality education and to meet the educational needs of both the rich and poor as well as contribute to human capital and skills development.