In Rwanda: Citizens Pray Where Virgin Mary ‘Appeared’ To Schoolgirls 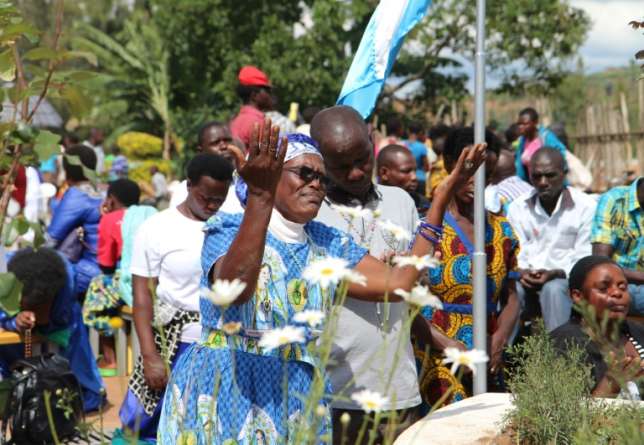 Christian pilgrims gather each year in their thousands in the southern Rwandan hill town of Kibeho, some hopeful of miracles where three schoolgirls said the Virgin Mary came to them.

A service held Monday in the small, isolated town marked the 35th anniversary of the first reported appearance of the mother of Christ, which was authenticated by the Vatican in 2001.

People crowded together in front of the brick church, some seated on the grass, facing a platform surrounded by blue and white flags, to hear the mass said in Kinyarwanda, French and English.

“It’s the fourth time I’ve come here. It was a long trip, but that doesn’t matter because I come to pray on holy ground,” saidAlphonse Munyemana, a bicycle-taxi driver of 19 who arrived on Sunday afternoon after pedalling for 10 hours from Nyamagabe to the north.

Many pilgrims came to Kibeho by bus, others also rode their bikes or came on foot and some travelled from neighbouring countries.

Rwanda is a former Belgian colony in central Africa bordered to the east by English-speaking nations.

People slept on the grass in front of the church, lacking the money to pay for a room in one of the hotels in town, which were all full anyway.

The annual pilgrimage began once the Roman Catholic Church formally acknowledged that the Virgin Mary had appeared to teenagers Alphonsine Mumureke, Nathalie Mukamazimpaka and Marie-Claire Mukangango, on November 28, 1981 and in subsequent years.

At the foot of the hill on which the church stands, the faithful queue up to fill containers with water from the “spring of the Virgin Mary“, which trickles into a brownish pond 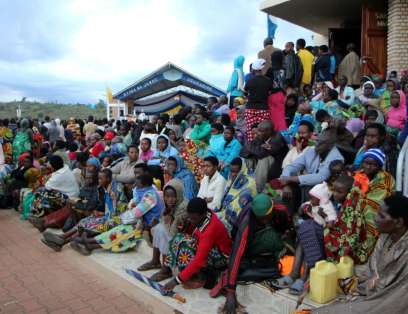 In the past, I had problems with swollen feet and breathing difficulties, but thanks to the blessed water I am cured,” saidCaritas Niyibigira, 47, from Rubavu in western Rwanda.

Grace Morris, a woman of 31 from Uganda, says that earlier this year, she saw a paralysed young boy recover the use of his limbs after being taken into the Chapel of Apparitions, the former high school dormitory where the Holy Mother is said to have appeared to the girls.

“We saw the child come running out of the chapel shouting with joy,” Morris said.

The Polish priest who has been rector of the sanctuary for 11 years, Zbigniew Pawlowski, says that the spring water is like“that of Lourdes, a bit special.”

However, he notes that none of the miracles held to have taken place at Kibeho have been investigated by a scientific commission and thus they have not been recognised by the Holy See.

Along the main road leading to the church, pilgrims can stop at boutiques to buy rosaries, statues of the Virgin Mary and T-shirts marked “I am the Mother of the Word,” which she is held to have told the schoolgirls when she first appeared.

Apart from a message calling for conversion, the Holy Mother is said in some interpretations to have warned of the genocide that would claim some 800,000 lives 13 years later, when Hutu militias and soldiers mostly massacred minority Tutsis.

“There were hills, burnt houses and many dead people, so we can say that the Virgin Mary showed what was going to happen in Rwanda a few years later.”

Kibeho was not spared in the slaughter.

In April 1994, hundreds of Tutsis who had taken refuge in the parish church, about 800 metres (half a mile) from the sanctuary, were massacred by Interahamwe youth militia.

Between April and July 1994, mass murders took place in many churches, where the killers found their victims gathered — some were betrayed by priests who handed over their flock.

On November 21, the Rwandan Catholic church asked for forgiveness for all Christians involved in the genocide, in a letter signed by the country’s nine bishops. The government led by President Paul Kagame, a former rebel whose forces ended the massacres, rejected the apology as inadequate and said that the call for forgiveness should come from the Vatican itself.

The church has been losing ground in Rwanda since the genocide. While about half the population of 11.5 million remain Roman Catholics, many people have turned to Pentecostal preachers and their call for “awakening”.