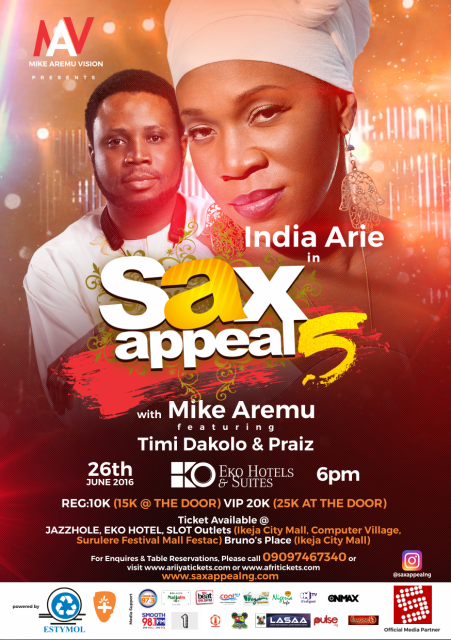 India Arie, who is enthusiastic about her first visit
to West Africa and Nigeria to be precisely does not
only confirm her visit in the video but also sends
warming shout out to Nigerians and Lagosians
ahead of her visit.

India Arie born India Arie Simpson has sold over 3.3 million copies in the United States and over 10
million copies worldwide. The Video and I’m Not
My Hair crooner, India has won 4 Grammy awards
from 21 nominations and two BET awards. India Arie, First time in West Africa, first time in

India will be performing as the headlining act live
at the SAX APPEAL 5 come Sunday the 26th of June
2016 at the Eko Hotel convention Centre, Victoria
Island Lagos alongside renowned saxophonist,
Mike Aremu. Also performing on the night would
be the duo of Timi Dakolo and Praiz. Sax Appeal is a production of mike Aremu Vision
and powered by Estymol.