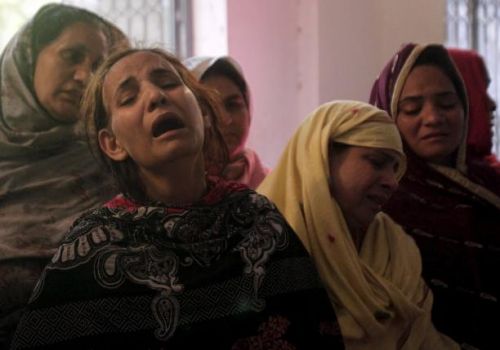 At least 70 people, mostly Christians and
children, have been killed in a mass suicide
attack in Lahore, Pakistan, on Easter Sunday,
with the Jamaat-ul-Ahrar terror group claiming
responsibility and admitting it targeted
Christians.

Another 300 people were injured in the bomb
blast, which was carried out in a park in
Lahore, close to a children’s playground which
was more crowded than usual as the minority
Christian population was celebrating Easter, BBC News reported.

Persecution watchdog groups have called for a
response from the Western world, asking why
close attention is only paid to terror attacks in
the U.S. and Europe, and not elsewhere around
the world as well.

“Today’s suicide bombing in Pakistan, which
was specifically targeted at Christians
celebrating the Easter holiday, is one of the
countless examples of the escalating global
persecution against Christians. Each life lost is
precious. I’m disappointed that the Western world only seems to pay close attention when
attacks happen here in the West. The lives lost
in Africa, the Middle East or Southeast Asia are
just as valuable as those lost in Europe or the
United States. We should be equally outraged
by their loss,” Open Doors USA President and CEO David Curry responded to the news in a
statement.

“Countering the kind of terrorism we saw
today in Pakistan will take strong leadership
and skilled diplomacy from the United States
with other like-minded nations. Together, we
must speak out against religious persecution
wherever it may be found,” he added.

Pakistani officials said on Monday that they are
searching for Jamaat-ul-Ahrar militants that
could have been involved in the planning of
the attack, who according to Reuters are a Taliban splinter group that has pledged loyalty
to the Islamic State.

“We must bring the killers of our innocent
brothers, sisters and children to justice and will
never allow these savage inhumans to over-
run our life and liberty,” military spokesman
Asim Bajwa said.

One witness explained that the park had been
so overcrowded that he was unable to enter
when he arrived there.

“We went to a canteen to have something to
eat, when there was suddenly a big blast,” said
the man, who gave his name as Danish.

“Everyone went panic, running to all directions.
Many of them were blocked at the gate of the
park. Dead bodies can be found everywhere.”

Another man who chose to remain anonymous
told The Associated Press that he had taken 20
children to hospital, and said: “I can’t explain
to you the tragic situation.”

A spokesman for Jamaat-ul-Ahrar said that the
attack on Christians was a direct challenge to
the government.

“The target was Christians,” spokesman
Ehsanullah Ehsan said. “We want to send this
message to Prime Minister Nawaz Sharif that we
have entered Lahore.”

Pakistan’s minority Christian population has
suffered numerous heavy attacks in the last
few years, including a deadly bomb blast at a
Peshawar church in 2013, where over 80
people were killed.

Wilson Chowdhry, chairman of the British
Pakistani Christian Association, explained that
Pakistani Christians have a long tradition of
celebrating as families at local park fun fairs,
and said that the attackers specifically targeted
children.

“The bomb that was packed full of ball
bearings was set of near the children’s area
with intent to pick off the most vulnerable of
visitors to the park,” Chowdhry added, noting
that the BPCA has started a donations fund for the victims