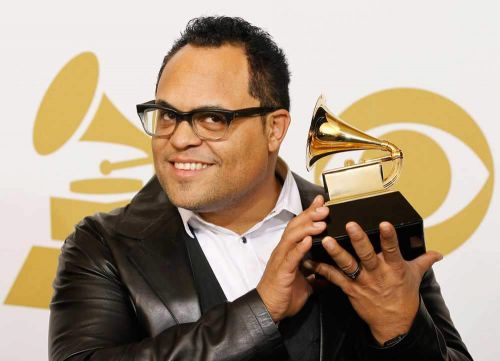 Israel Houghton had quite the rough ride in the media this year after announcing his divorce to his long-time wife and then months later his engagement to new girlfriend Adrienne Bailon. The popular worship leader is now back out ministering and many Christian music supporters welcomed him back as he led a song last week at Code Orange Revival sponsored by Elevation Church in North Carolina.

“It was such an honor joining with the @elevationworship team tonight at @elevationchurch for #codeorangerevival singing one of my favorite songs ‘O Come To The Altar’ Such a great refreshing couple days here. Thank you @stevenfurtick for being my friend,” Houghton wrote on Instagram.

Pastor Steven Furtick also celebrated having Houghton at the revival. The young leader even posted a video of the two of them singing a song together while sitting in the audience.

“One of my favorite #CodeOrangeRevival moments – most awkward spontaneous hymn duet in church history with my brother and friend, Israel & New Breed,” Furtick shared on Facebook

When the video clip of Furtick and Houghton hit the internet people immediately shared their thoughts on Houghton leading worship.

“God bless you. Keep moving forward. You have a lot of people that are not just fans, but brothers that pray for you and love you,” a Facebook user wrote.

Another said, “May the Lord restore you back up to higher and deeper levels than you could ever imagine.”

In the midst of hundreds of congratulatory posts, a few others were not so supportive, however, and blasted Houghton for committing adultery, getting a divorce and then getting into a new relationship so quickly.

“Israel Houghton has been adulterous with no repentance but instead openly stated God’s approval. That isn’t something to be proud of,” someone wrote.

“Israel Houghton has been adulterous with no repentance but instead openly stated God’s approval. That isn’t something to be proud of,” someone wrote.

“I have seen and felt the essence of God’s grace through the life, the kindness and the courage of this woman. I’ve seen her attacked, lied about, wrongfully accused, mocked, laughed at, and misunderstood. But, I’ve also seen the shining example of the eagle she is that rises above the cacophony of the noise of ignorants- I’m learning from her example. She loves Jesus. She loves her family. She loves people. Even the ones that don’t love her back. I pray God give me that same grace in my life. I’ve taken a giant leap of faith in asking her to share life with me forever and to give me a shot at getting it right this time… She has graciously granted my request… She said yes. Thanks Be To God. Thank you @adriennebailon for graciously loving me,” Houghton captioned the photo.

News of Houghton, 44, and 32-year-old Bailon’s romance first surfaced when she was photographed in a bikini on a beach in Mexico with the Lakewood Church worship leader (currently on indefinite leave) in March. What started as rumors stemming from tabloid photos that Bailon and Houghton were dating were quickly confirmed and it came just a month after Houghton publicly announced that his marriage of some 20 years was legally over. Bailon initially stayed mum as the photos circulated and Houghton was the first to address the rumors.

“I met Adrienne Bailon a bit over 2 years ago, we worked together & became friends… Our circles connected & we remained good friends. From a friendship, as two single adults we have very recently begun to explore a dating relationship,” he confessed in a Facebook  post.

The new romance sparked controversy because Houghton publicly repented and addressed his divorce in an open letter posted on Facebook earlier this year. “It is with a collective heavy heart that we announce that after over 20 years of marriage and a long separation, Meleasa and I are officially divorced,” he wrote.

“Several years ago I failed and sinned in my marriage,” he confessed. “Though this is new to many, it is not new to us as we have been working through this for over 5 years. Although we tried, the challenges in our relationship have proven too much to overcome.”

Bailon was pegged as the reason for Houghton’s divorce when the beach photos surfaced, but the actress maintained that she didn’t even know him at the time of his personal failure, and said that the public blaming her for a marriage ending was “hurtful.” Houghton has since taken leave of his role as worship leader of Pastor Joel Osteen’s Lakewood Church but is still out doing concerts.

Houghton and Bailon first worked together on the 2013 flick produced by Houghton, “I’m in Love with a Church Girl.”