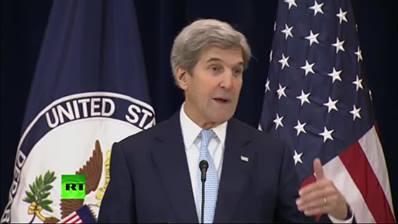 U.S. Secretary of State John Kerry on Wednesday warned that the two-state solution for Israel and the Palestinian Territories is in “serious jeopardy.’’

The United States allowed a UN resolution condemning Israeli settlements to pass last week in an effort to preserve the possibility of such an outcome to the enduring conflict, Kerry said.

The outgoing secretary of state, who led the last attempt to broker a Middle East peace deal, used the more than an hour-long speech to express his frustration with the Israeli government and outline his vision for a future settlement between Israel and Palestine.

“The two-state solution is the only way to achieve a just and lasting peace between the Israelis and Palestinians,” Kerry said, adding that it was also the only way to ensure Israel’s future as both a Jewish and democratic state.
https://www.facebook.com/plugins/video.php?href=https%3A%2F%2Fwww.facebook.com%2FRTAmerica%2Fvideos%2F10154057278576366%2F&show_text=0&width=560"

“For over an hour, Kerry obsessively dealt with settlements and barely touched upon the root of the conflict – Palestinian opposition to a Jewish state,’’ Netanyahu said in a statement.

In Washington, Kerry noted that before last week, the Obama administration had been the only administration since 1967 that had not allowed any UN resolution to pass that Israel opposed.

The U.S. would not have been true to its values if it allowed a “viable two-state solution to be destroyed before our own eyes,’’ Kerry said in defending the U.S. abstention at the Security Council.

Successive U.S. administrations of both parties have supported a two-state solution, although president-elect Donald Trump recently named an ambassador to Israel that rejects it.

Kerry also said that contrary to Israeli accusations, “the U.S. did not draft or originate this resolution.’’

The secretary of state said trends on the ground between Israel and the Palestinian Territories – including terrorist attacks, growing numbers of settlements and a “seemingly endless occupation are cementing an irreversible one-state reality.’’

In candid remarks about the current Israeli government, Kerry called it the most right-wing in the country’s history, saying it has an agenda “driven by the most extremist elements.’’

The U.S. cannot be expected to support the agendas of extremists on either side to create a “unitary state,’’ he said.

He complained bitterly about the increased number of Israeli settlements on the West Bank, saying they are putting a peace deal further out of reach and “defining’’ the country’s future.

Kerry reiterated the U.S. belief that a two-state solution is the only way to achieve a just and lasting peace between Israelis and Palestinians and laid out a six-point plan that the two sides could follow.

“We all know that a speech alone won’t produce peace,’’ he said.

But he encouraged the parties to take his suggestions seriously and create the conditions for successful talks.

Earlier Wednesday, a high-ranking Israeli minister lashed out at Kerry, calling his plan to speak on the Middle East peace process “pathetic.’’

Public Security Minister Gilad Erdan also called Kerry’s address “anti-democratic’’ because it will tie U.S. president-elect Donald Trump to positions that are difficult to change, according to a report.

Trump took to Twitter on Wednesday to accuse Obama of treating Israel with “total disdain and disrespect.’’

“They used to have a great friend in the U.S., but not anymore,’’ Trump said of Israel.

Trump has named bankruptcy lawyer David Friedman, who has said that he does not think Israeli settlement activity is illegal and opposes a two-state solution, as his U.S. ambassador to Israel.

Jerusalem’s planning committee cancelled a scheduled discussion about approving the construction of nearly 500 housing units in East Jerusalem without explanation.

However, hours before Kerry was set to speak, the committee decided to approve a settlement housing project in Jerusalem’s predominantly Palestinian neighbourhood of Silawn, according to the report.

The move is in direct defiance of the resolution’s recommendations.