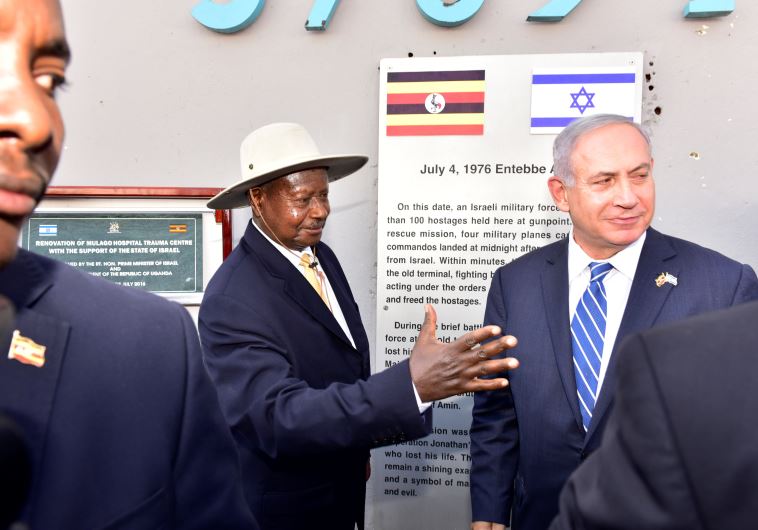 Prime Minister Benjamin Netanyahu, spearheading
an intense Israeli diplomatic initiative in Africa, is
expected to travel to West Africa by the end of the
year to take part in a summit of the 15-member
Economic Community of West African States
(ECOWAS) to be held in Abuja, Nigeria.

Netanyahu returned from a four-day, four-country
visit to east Africa earlier this month,where he met
at a summit in Uganda with leaders from seven East
African countries.
On Thursday he met in his office with Marcel Alain
de Souza, the president of ECOWAS. The two men signed a joint declaration of intent for greater
cooperation between Israel and the organization,
which represents countries that have a combined
population of some 320 million people.
The declaration states that both parties “positively
view the participation of the prime minister of the State of Israel in the ECOWAS summit in the near
future.”

Palestinian Authority President Mahmoud Abbas
recently addressed the African Union summit in
Rwanda, a privilege not given Netanyahu because,
unlike the PA, Israel does not have observer status in that organization. During Netanyahu’s recent trip
to Africa, the leaders of Kenya and Ethiopia publicly
pledged to rectify that situation.

Among the 15 countries in ECOWAS are two with
whom Israel does not have diplomatic relations:
Niger and Mali. Earlier this month Israel re- established diplomatic ties with Guinea, which is
another ECOWAS state.
Foreign Ministry director-general Dore Gold said
that this group “is one of the most important sub-
regional organizations in Africa, and it brings the
Prime Minister’s [Africa] initiative, that started with east African countries like Kenya and Ethiopia, to
the western part of the continent.”

Gold said that while de Soussa, from Benin, does
not take action without consulting the other states,
he does not know whether he specifically called the
leaders of Niger and Mali before embarking on his visit to Israel and signing the letter of intent for
increased cooperation.
The two men discussed deepening their
cooperation particularly in the field of agriculture,
desertification, water, education and health.
Security issues were also raised, and in the declaration of intent Israel stated that “it stands
with the people of the ECOWAS countries in their
ongoing battle against militant terrorism that is
plaguing Africa.”

The Islamic State affiliated Boko Haram is very active
in West Africa, particularly Nigeria. This was the first ever meeting between an Israeli
prime minister and the president of ECOWAS, even
though Israel has had a relationship with that
organization for the last decade.
In addition to Guinea, Mali, Niger and Nigeria,
ECOWAS is also made up of the following states: Benin, Burkina Faso, Cape Verde, Coite d’Ivoire,
Gambia, Ghana, Guinea-Bissau, Ivory Coast, Liberia,
Senegal, Sierra Leone and Togo.