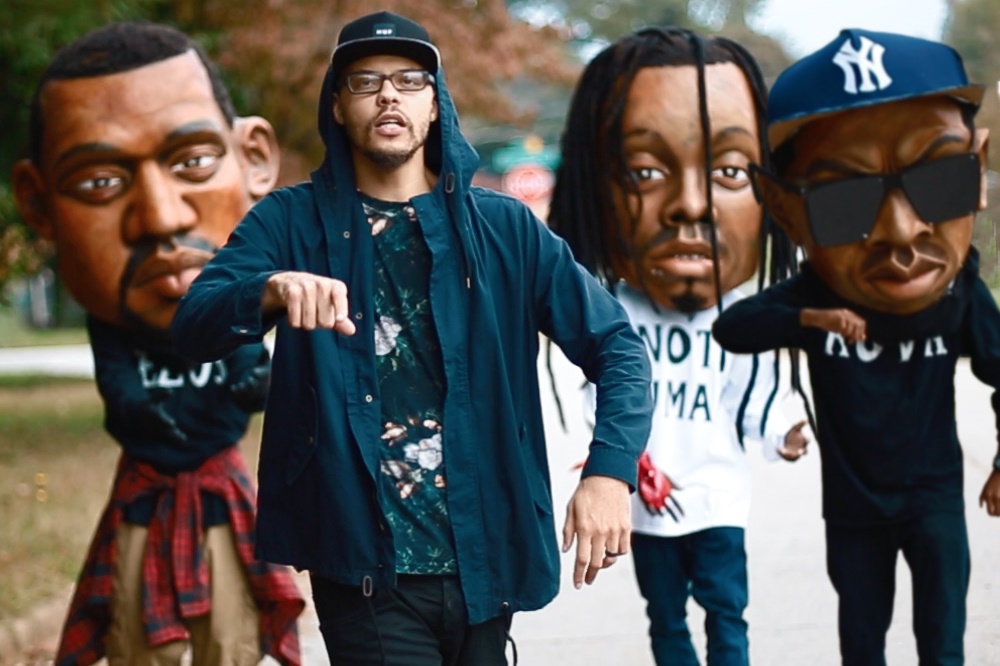 They personally did not cameo. Instead, each
rapper was depicted by three oversized masks.

“I started the idea to build these masks to represent
or to give a message about artists who have, in
their pride, tried to liken themselves to God or to a
god,” J. Monty told Rapzilla. “I think that’s a very
dangerous concept, simply because we’ve seen in it
scripture before. The person who embodied that concept is the number one enemy of the kingdom
of God, and his number one sin was trying to be
like God, trying to become God in Heaven, trying to
take God’s place. And because of his pride and
rebellion, he got kicked out of Heaven.”

Jay Z has called himself “Hova” for years. Kanye
West titled his sixth studio album Yeezus in 2013.
Christians have called the monikers, which display
on the shirts of those who wear Jay Z and Kanye
West’s masks in the music video, blasphemous. The
shirt of the person who wears Lil Wayne’s mask reads “Not Human,” a reference to his eighth studio
album, I Am Not a Human Being.

“[Satan] was a musician when he was in Heaven,” J.
Monty said. “We see that concept in Ezekiel 28 and
Isaiah 14. Those scriptures speak allegorically
about the king of Tyre, but if you really read into
them and study them exegetically, you find that
scripture is speaking of Satan as he was in Heaven, so I find it very, very alarming that we have artists/
musicians on Earth living out the exact same
concept.

“We see that concept in Revelation 12, when Satan
was kicked out of Heaven, one third of the angels
were kicked out with him. We can draw the
conclusion that Satan was so manipulative that he
actually convinced one third of these
extraterrestrial beings to leave a place of glory and follow him to this hellhole called Earth. If he was
deceptive enough to convince them to leave
Heaven to come here, how much more could he
convince regular human beings to leave Earth and
follow him to a lower place of separation from
God?”

J. Monty, a Rapzilla Freshman 15 member, said the music video is two years in the making. He had
actually finished an entire song about this concept
alone, having it mixed three times by three different
engineers, but it took so long for the independent
artist to pay for the masks and get them in his
possession that some of the song content became outdated. He scrapped the track, and instead
implemented the concept into “100 Bars, Pt. 3,”
track No. 4 of his album which drops on Friday, Second Born.