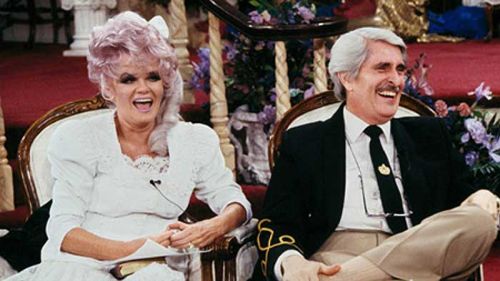 Tributes are pouring in for Trinity Broadcasting
Network co-founder Jan Crouch, who died at the age of 78 following a massive stroke last week, including from popular pastors and
award-winning Christian music artists.

“Today Jan Crouch enters heaven as
@HillsongChannel commences tomorrow. It’s
only possible because of her legacy,” tweeted
Brian Houston, senior pastor of the influential
Hillsong Church that started in Australia but
now as campuses around the world.

Fellow Grammy winning singer-songwriter
Israel Houghton tweeted, “My deepest
condolences to the @TBN & Crouch family. I
knew Momma Jan for 25 years. She was always
kind to me.

Paul and Jan Crouch invited me into the TBN family 2009.. that microphone changed my life forever. I'm saddened by her passing. #legacy

Our condolences to the entire @TBN family at the passing of Jan Crouch. Paul and Jan changed the world.Now it's our turn to lift Jesus high.

Hispanic Evangelical leader the Rev. Samuel
Rodriguez tweeted, “Our condolences to the
entire @TBN family at the passing of Jan
Crouch. Paul and Jan changed the world. Now
it’s our turn to lift Jesus high.”

“Laurie and I have just watched the transition
of our precious Mother from this world to the
next; watched her step into the presence of
Jesus and into her heavenly reward.”

The family statement added: “Jan Crouch,
known around the world as Momma Jan, has
gone home.”

TBN had shared last week that Crouch was
taken to the hospital after suffering a massive
stroke in Florida, with the news amassing
sympathy and well wishes from church leaders
and other prominent Christian figures around
the world.

Christian singer Carman Licciardello said on
Facebook that he had been close to Crouch for
40 years, calling her “family.”

“We have won countless souls to Christ
together through that network. She is the best
friend you can ever have when your going
through a crisis and feel like everyone has
abandoned you. Example: when I went
through 10 months of cancer treatment and sent out 600 letters to 600 churches I’ve
ministered at, for support, and not one
responded, it was Jan who paid my bills so I
could focus on my fight with cancer,”
Licciardello revealed.

“So sad to hear about the passing of TBN
Trinity Broadcasting Network co-founder, Jan
Crouch. She was always extremely kind to me
and always supported everything I did. I was a
guest many times over the years and I am
grateful for her generosity. God Bless You Jan! Our prayers and thoughts go out to the entire
Crouch family.”

Others, including J.D. Bellamy, who serves
under Pastor Paula White, noted the reach and
size of her legacy:

“This morning we are sadden by the death of
Mrs. Jan Crouch. You touched millions around
the world! We are beyond sure that your
legacy will forever live on!” Bellamy wrote.