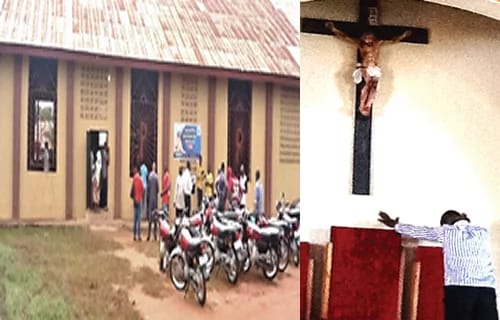 – The crucifix of Jesus in a church came alive in
Makurdi

– The sight has brought crowd to the church

Hundreds of people have begun to troop to Saint
Augustine’s Catholic Church which is located in the
Nenger area of Makurdi in Benue following the
“appearance” of an ‘image’ of Jesus.

New Telegraph reports that the church which is
situated behind Government Model College became
a hub for Catholic and non-Catholic worshippers
after bright image fell on the crucifix of Jesus.

The crucifix is described as a structure of Christ
when he rose from death after he was crucified and
buried and according to witnesses, it had on its
head a crown, while the entire body was glittering,
like precious stone.

It was reported that the sight first appeared during
a church service on Friday, August 5 and attracted a
large number of visitor to the church.

A witness said people struggled to get close to the
crucifix to touch it and were shouting: “Jesus save
me,” “Jesus the son of God, have mercy on me.”

Mr. Emmanuel Hembenkaan who is one of the
parishioners in the church said the light
overwhelmed the whole church and he was
shocked when he saw it.

He said this was the first time such occurrence
would happen in the church and suggested that
this takes place when the people in a place were
suffering and had prayed hard for God’s
intervention.

He admitted that the sighting has brought a crowd
of people from different parts of the state to see the
image of Jesus.