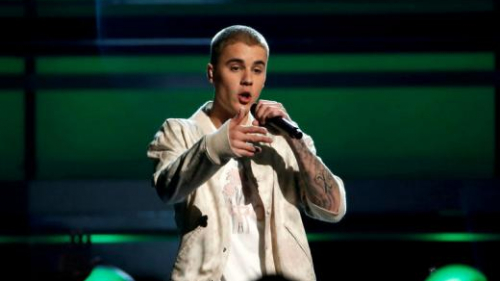 Justin Bieber fans shouldn’t expect to hear him collaborate with Hillsong United anytime soon, according to the pop star.

The 23-year-old singer-songwriter spoke with paparazzi after a hike at Runyon Canyon in Los Angeles, California, Monday. In a Daily Mail report, paps questioned Bieber about his potential plans to collaborate with musicians from church.

“Nope,” Bieber said simply. I’m not working with any artists at the church.”

When asked if he was interested in starting a church of his own, Bieber responded, “No. Nah. Nope.”

Bieber was baptized by Hillsong NYC Pastor Carl Lentz in 2014. Since then, the pair have formed a close bond and are often spotted together.

On Sunday, the pair attended the Aces Fights On charity basketball game at New York City’s Madison Square Garden which benefited Tackle Kids Cancer and Garden of Dreams organizations. Earlier this summer, they attended the Hillsong Conference in Sydney, Australia, together.

Although it doesn’t seem the church’s worship band, Hillsong United, will be featured on a Bieber record any time soon, the pop star does use their worship music to worship God. Just last month, he posted an Instagram video of himself dancing to the Hillsong United Song “Not Today.”

“Let the devil know NOT TODAY! The devil has no power when you know the LIVING God,” Bieber wrote in the video caption. “His name is JESUS!! Why worry when you can worship.”

Bieber isn’t planning on starting his own church, but he has been vocal about wanting to grow in his Christian faith. In a previous interview with Complex, Bieber said he is striving to be more like Jesus Christ.

“I just wanna honestly live like Jesus. Not be Jesus. … I don’t want that to come across weird,” he said in 2015. “He created a pretty awesome template of how to love people and how to be gracious and kind.”

While the singer has canceled the remainder of his “Purpose” world tour, he previously spoke about how God was using him while he performs.