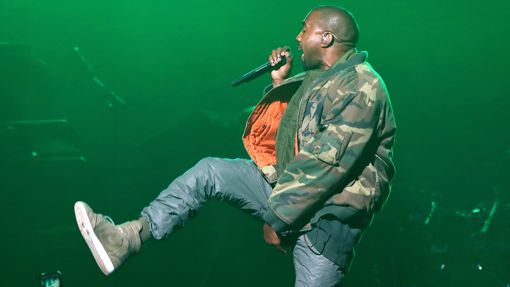 Kanye West called his new album, which still has
no official title, “a gospel album with a whole lot
of cursing on it,” in an interview with Big Boy

Kanye West teased his new album, tentatively
titled Waves, as “a gospel album with a whole lot
of cursing on it,” during an interview with radio host Big Boy.

noting he was playing the record for gospel star
Kirk Franklin when the description struck. “It’s
the gospel according to ‘Ye. Not exactly what
happened in the Bible, but it’s a story of this idea
of Mary Magdalene becoming Mary.”

West also noted that the record still does not
have an official title, despite last week’s proclamation that he’d changed it from Swish to Waves. West suggested he might return to
the album’s original title, So Help Me God, which
his wife Kim Kardashian included in a recent Twitter poll asking fans which name they liked best.

“I wanted to get people’s opinions,” West said of
the poll. “What I’ve come to realize about being a
celebrity or a musician or someone that’s on the
other side of the Internet or TV, everybody is our
family … When people can tweet or comment or
chime in or say the vibrations they felt about something, we can have this continued
conversation. There were so many times in my
career when people thought I was out of there,
no more, but obviously I had made a connection
with people, a family-level connection, that they
played my music in their houses. And we love any opportunity to involve all of our family in the
creative process.”

Despite the minutiae still left to be settled, West
sounded giddy when speaking about his
album’s impending release. Recalling the visit
Kendrick Lamar and the rest of Top Dawg made
to approve the final mix of “No More Parties in L.A.” before it was released, West said, “This ultra light beam that we on right now is all coming
together for this package, this delivery, this
three-year-in-the-making gift.”

West will debut his seventh LP at a Yeezy Season 3 event at Madison Square Garden on February 11th. The event will be broadcast live to movie theaters around the world starting at 4 p.m. ET; ticket information is available on West’s website