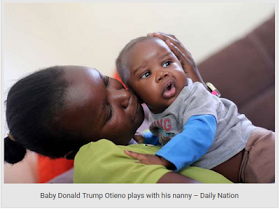 A couple from Kisumu , Kenya, have named their baby after Unites States President-elect, Donald Trump.
According to , the parents of the baby, Mr Felix Otieno and Ms Lorna Akoth, said they selected the name due to Trump’s principles. However, the couple have remained adamant in their decision to name their child after Trump after series of criticisms emerged on social media from Kenyans against the idea.
Mrs Lorna Akoth, disclosed that their three month baby was named after Trump because herself and her husband, Mr Felix admired Trump’s open mind that made him make tough statements regardless of his audience during the campaign.

“At the time, I was not sure whether Mr Trump would pull a surprise victory but I had the conviction the businessman had what it took to be a leader. Most politicians are not sincere like him. I admired him because he is a man who says what he thinks. He was frank and firm. At least he spoke the truth without using propaganda or lies to win votes. We loved him and had to name our son after him,” said the mother