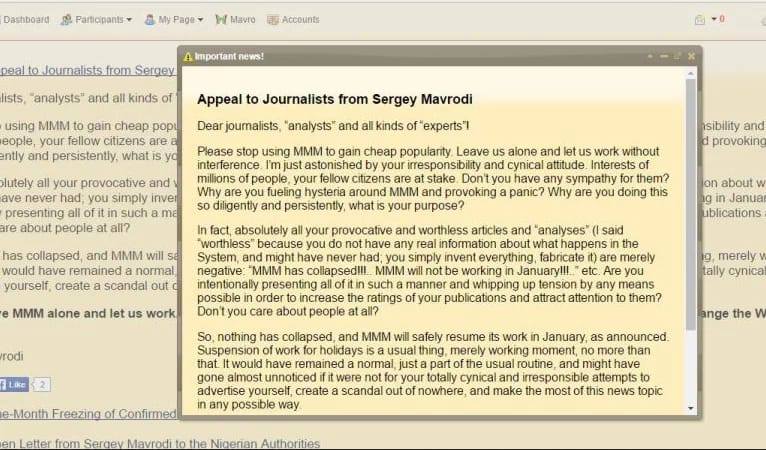 Irritated by what he described as bad press against the wonder-bank, Mavrodi Mundial Movement, MMM, its founder, Sergey Mavrodi, has written an open letter to Nigerian journalists, “analysts” and all kinds of “experts” who according to him are guilty of causing unnecessary panic and tension among MMM participants in the country.

Sergey Mavrodi of inventor MMM Mavrodi who expressed his disappointed about the way MMM is being painted in the media, said emphatically that “MMM will be back in January” while stating that the rumour about the scheme collapse should stop. Mavrodi’s open letter is coming after a one-month freezing of confirmed “Mavros” notice was sent to MMM Nigeria participants on Dec 12, 2016. Sergey Mavrodi went ahead to describe articles from Nigerians journalists and bloggers as “provocative and worthless.” His statement read: “Dear journalists, “analysts” and all kinds of “experts”! Please stop using MMM to gain cheap popularity.

Leave us alone and let us work without interference. I’m just astonished by your irresponsibility and cynical attitude. Interests of millions of people, your fellow citizens are at stake. Don’t you have any sympathy for them? Why are you fueling hysteria around MMM and provoking a panic? Why are you doing this so diligently and persistently, what is your purpose? “In fact, absolutely all your provocative and worthless articles and “analyses” (I said “worthless” because you do not have any real information about what happens in the System, and might have never had; you simply invent everything, fabricate it) are merely negative: “MMM has collapsed!!!.. MMM will not be working in January!!!..” etc. “Are you intentionally presenting all of it in such a manner and whipping up tension by any means possible in order to increase the ratings of your publications and attract attention to them? Don’t you care about people at all? “So, nothing has collapsed, and MMM will safely resume its work in January, as announced. Suspension of work for holidays is a usual thing, merely working moment, no more than that.

It would have remained a normal, just a part of the usual routine, and might have gone almost unnoticed if it were not for your totally cynical and irresponsible attempts to advertise yourself, create a scandal out of nowhere, and make the most of this news topic in any possible way. “Again, leave MMM alone and let us work. Nothing has collapsed, and MMM will perfectly resume its work in January. We Can Change the World!”