Lecrae Chastised By Fans For Tweeting ‘Xmas’ Instead Of Christmas 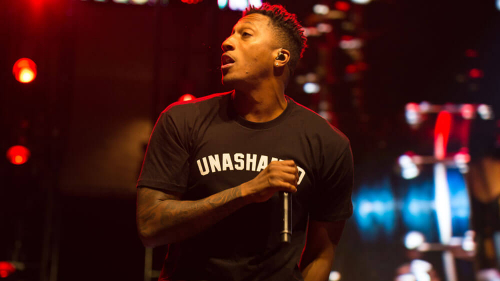 When famous Christian rapper Lecrae let over 1 million Twitter followers know that he was watching “#NBAXmas,” multiple people chastised his decision to replace the word “Christ” with an “X.”

“Love ya but why are you Xing out Christ in Christmas? #NBAChristmas,” one person with the Twitter name Millie Roman asked the 37-year-old artist who was the first to simultaneously top both the Billboard gospel music charts and the Billboard 200 with his 2014 albumAnomaly.

Another follower of Lecrae’s questioned his belief in Christ.

“@lecrae XMAS ??????? & you claim to be a CHRISTIAN, ” a person with the Twitter handle The Jesus Man posted on the social media network.

Still others took a more subtle approach when addressing the entertainer and author.

While Lecrae did not defend himself against all of the backlash he received, a couple of Twitter users decided to repost a Dictionary.com explaination of the word “Xmas.”

“But the history of the word ‘Xmas’ is actually more respectable — and fascinating — than you might suspect. First of all, the abbreviation predates by centuries its use in gaudy advertisements,” the explanation reads. “It was first used in the mid 1500s. X is the Greek letter ‘chi,’ the initial letter in the word Χριστός.”

The explanation goes on to make the case for X being an acceptable substitution for Christ.

“And here’s the kicker: Χριστός means ‘Christ.’ X has been an acceptable representation of the word ‘Christ’ for hundreds of years,” the website states.”This device is known as a Christogram. The mas in Xmas is the Old English word for ‘mass.'”

Dictionary.com goes on to state, “in the same vein, the dignified terms Xpian and Xtian have been used in place of the word ‘Christian.'”

Although Lecrae did tweet “NBAXMas,” he also posted a graphic image that reads“Merry Christmas” on Twitter before sharing the message that became a hot button topic for some of his followers.

Despite what some may believe about Lecrae’s Christian faith, the rapper, speaker and author has spoken in detail about his beliefs.

“For a lot of people, groups, Christians included, issues are homogenized and so to be a Christian I’m either this staunch conservative Republican or I’m this tree hugging liberal,” Lecrae said in an interview with CNN earlier this year. “You’re stereotyped. It’s almost assumed that people know what your issues are going to be.”