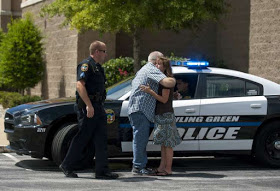 Police say a 21 year old man, Ethan A.
Buckley allegedly stabbed his father during a
church service on Sunday in Kentucky. Bowling
Green police say that the son was fortunately
subdued by congregation members and security
workers and taken into custody following the stabbing on Sunday at Hillvue Heights Baptist
Church before any more damage could be done.

The victim was taken to a hospital where his
condition wasn’t immediately known.

Witness Ashlyn Rice was standing at the back of
the crowded church when she heard a commotion
toward the front. She says it happened near the
end of the 9:30 a.m. service. She saw people run
for the door and followed them.

The reason for the stabbing is unknown.

Buckley has been charged with assault and
lodged in the Warren County Regional Jail.