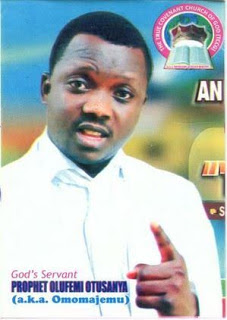 The General Overseer of The True Covenant Church of God (TCCG), Prophet Olufemi Otusanya has released his revelations for 2017. In an interview with Prestige Magazine, he reveals spiritual insights into the fate of Nigeria and the world at large in the New Year.

State of the economy
On the economy it will be better than that of last year. In 2017, the Lord promise divine provision to those who believe in him. Prices of commodities will come down. In 2017 exchange rate will reduce little compare to what was obtainable in 2016, but the reduction will be little. But Nigeria will be better economically than what was obtainable last year.

Women and Young Ladies
Warnings to women and young ladies, because Lord said a lot of them will be used for ritual. They should pray very well and be vigilant not to be a victim of ritualists. This is a big warning to those ladies that always look out for free ride popularly called lift.

Boko- Haram
There will be crises in some place but we are praying against that. Boko-Haram will want to re-strategize, we will see the signs but God will defeat them. In 2017, God will reveal Boko-Haram sponsors.

Federal Executive  In 2017 there will be minor cabinet reshuflement, some ministers will be replaced.

Plot to remove President Muhammadu Buhari There is a plan or plot to remove the president from the seat but God said he will intervene to destroy the plot. God said he is the one that installed the current president. We will be seeing those signs. There will be a lot of collision and division within the political set up

Agriculture
In agricultural sector it will be better, that will lead to availability of some commodities.

Plane Crash
We should also pray against plane crash in 2017, if we pray very well God will avert it.

Notable Pastors
There will be revelations about some notable pastors in Nigeria. We should pray very well so that God will not call home one of the great men of God in Nigeria. If we pray God can extend his tenure.

Warfare
There will be a kind of warfare in the northern part of Nigeria. We should pray against it. Country will rise against country in 2017 more than before. God said he will walk through this country and perform wonders against those disturbing Nigeria’s peace.

Outbreak of Incurable Disease
There will be outbreak of an incurable disease in 2017, if we pray very well the Lord will take care of it. Between June and August different things will happen that will affect the health of people. If we pray God will avert it.