Mark Zuckerberg Responds To President Trump’s Claim Against Him 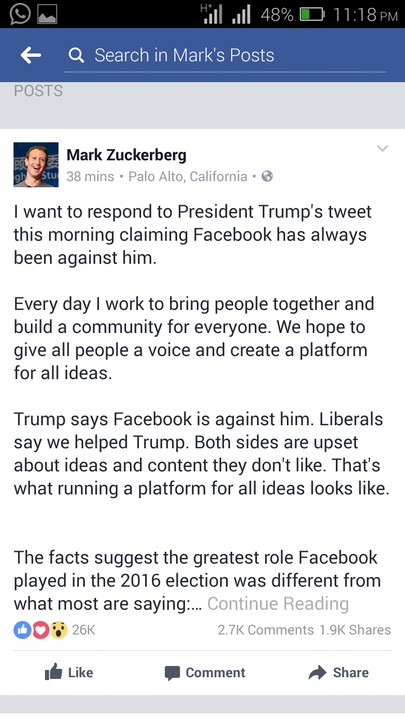 I want to respond to President Trump’s tweet this morning claiming Facebook has always been against him.

Every day I work to bring people together and build a community for everyone. We hope to give all people a voice and create a platform for all ideas.

The facts suggest the greatest role Facebook played in the 2016 election was different from what most are saying:

After the election, I made a comment that I thought the idea misinformation on Facebook changed the outcome of the election was a crazy idea. Calling that crazy was dismissive and I regret it. This is too important an issue to be dismissive. But the data we have has always shown that our broader impact — from giving people a voice to enabling candidates to communicate directly to helping millions of people vote — played a far bigger role in this election.

We will continue to work to build a community for all people. We will do our part to defend against nation states attempting to spread misinformation and subvert elections. We’ll keep working to ensure the integrity of free and fair elections around the world, and to ensure our community is a platform for all ideas and force for good in democracy.