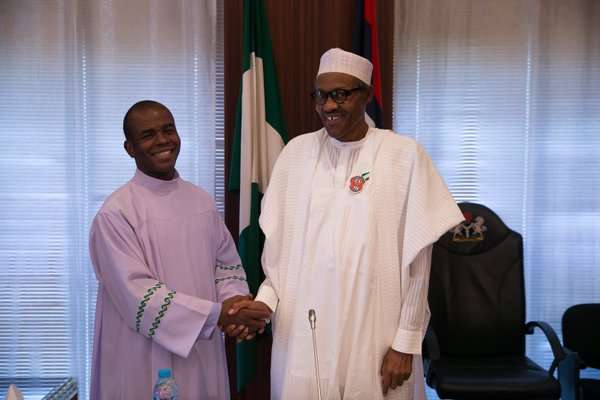 Buhari has been defended by Rev. Fr. Ejike Mbaka, who has also called on Nigerians to pray for the president.

Lately, death rumours of president Muhammadu Buhari have been all over the Internet.

Despite the presidency’s attempts to debunk these claims by posting pictures of the president in London, these rumors continue to swirl around.

Rev. Fr. Ejike Mbaka, the spiritual leader of the Adoration Ministries in Enugu State, is the latest person to react to these,Nigerian Bulletin reports.

While delivering a sermon at the first Adoration Crusade for the year, the cleric advised people to pray for the president, instead of spreading death rumors.

Mbaka said: “Those wishing the president dead don’t love this country. Children of God, what do people gain by wishing somebody dead? We should pray for our leaders; that is what the Bible says.”

He also spoke on the president’s cabinet.

According to him, the motives of these officials differ from the president’s intentions.

“Buhari has good intentions for the country; unfortunately, his subordinates have different agenda – they are interested in their pockets,” he said.

Rev. Mbaka is not the first to rise to the president’s defence.

Buhari has been defended by former President Olusegun Obasanjo, who released a statement.

Just like the cleric, he encouraged people to pray, instead of spreading rumors.

“No normal human being will wish an elderly person dead, irrespective of their differences.

If you don’t like him, wait for another election, not going about to say he is dead. No matter his health situation, we should pray for him to recover quick and come back stronger and better.

For anyone wishing him dead, such person or group of persons are callous, wicked and treacherous.

I was also rumored to have died almost 12 times. I don’t know what they derive from doing so, but, they should seek for forgiveness.

Even if we know that the President is sick, he is in a better position to know what to say or what to do and not wishing him dead. We should just stop politicizing everything, especially with the elderly in the country,” he said.

Youths from Bauchi State have also shown their support for the president.

DailyPost reports that they took to the streets with placards that had things like, ‘Buahri is alive, say what you like’, ‘Support Baba Buhari’, ‘I love Naija, I love Buhari,’ written on them.