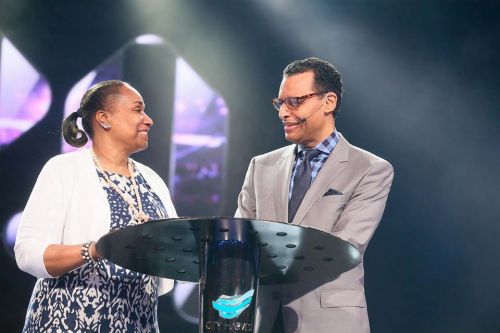 A.R. Bernard, one of New York City’s most
influential pastors and leader of the 37,000-
member Christian Cultural Center in Brooklyn, revealed Thursday that he and his wife, Karen,
who have been married for more than 40
years, were once headed for divorce.

“Pastor or not we were headed for divorce,”
said Bernard Thursday during an interview on New York’s Power 105.1 morning radio
program, The Breakfast Club, about his new
book “Four Things Women Want from a Man.”

“I will tell you, I look back and I made some
very immature, stupid decisions and maybe
that will be in another book. Details, the juicy
details,” he continued before discussing some
of the missteps he made as a husband.

“I realized that she (Karen) became a product
of what I was doing and the lack of priority
that I had because my ministry was my
mistress. And that made me vulnerable and I
didn’t even see it because you begin to reason
and justify things along that line that you know, that pulls you away from faithfulness to
your family,” he said.

He explained that before he started his ministry
he worked in banking and his job was also his
“mistress.”
“I will tell you before that my job was my
mistress and she put up, my wife put up with
that for the ten years that I was at the bank. You know I was taking care of her she was
happy we had a great relationship.”

In his book he argues that the four things
women need most in men are: maturity,
decisiveness, consistency, and strength. And
he touched on different aspects of these
qualities during the interview while noting that
cultivating them can help create healthy and successful relationships.

“Women, they’ll be happy if God is first in my
life but she better be second. Plain and simple
and that makes sense because women are
always reflecting on the value that they have in
the eyes and the mind of the man that they are
with. If he engages in behavior that devalues her, she’s going to feel that she is competing
with all these other things that he is putting first
before her in his life,” he explained.

One of the show’s co-hosts Charlamagne Tha
God argued however that he didn’t see why
working hard, especially for God, was so
wrong, and that his wife should have
understood.

“Sounds like she needed more God in her life
or church,” quipped Charlamagne

“You know what, we can use these clichés, you
need God, get the Holy Ghost and everything
will be fine but that’s not the reality,” said
Bernard.

When asked how can a man whose job
requires a lot of time to be successful make his
relationship work, Bernard said he should
make the time that he has count.

“It’s not the amount of time it’s what you put
into the time,” he said.

“So you can have a small amount of time. If you
make that quality time and give that woman a
quality experience that can go a long way in
allowing you to take the time necessary to
work but too often we don’t do that,” he said

“And men tend to feel the need to keep their
word to people outside their family because
their family should understand, but the reality
is no, the family should be the first place of
demonstrating consistency and integrity
because if that’s strong, then you have the strength to deal with that world outside. My
children didn’t understand and they put up
with a lot,” he continued.

“And one thing that my wife says and I think
it’s so powerful when people ask her who
know about what we went through and the
challenges, ’cause we were near divorce,
alright, she said what helped her is that she
trusted the God in me. If anything, she wouldn’t, because she knew me before I
became a Christian. She knew that this man
experienced a very spiritual profound
transformation and he has been consistently
committed to that since that time without any
interruption. She trusted that. And that’s what gave her a sense of stability and hope to
continue in the relationship.”