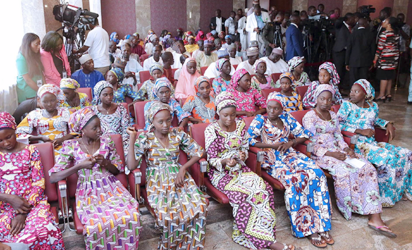 The Federal Government yesterday stated that dialogue was still ongoing to ensure the release of more Chibok girls and other persons held hostage by terrorists , even as it has threatened to deal with sponsors of Boko Haram as terrorists.

Senior Special Assistant to the president on Media and Publicity , Dr Femi Adesina made the assertion in Lagos after presenting a paper titled ‘ The Challenges and Expectations of the Media in Military Operations’ at a workshop organised by the Directorate of Army Public Relations, DAPR for its officers, Commanding officers and Defence correspondents.

Chibok
Reiterating federal government’s resolve at ensuring that those held hostage by members of the Boko Haram sect were released in good condition, Adesina said ” This government is doing all it can to tackle insurgency. If it knows the sponsors and is double sure they are the sponsors, it would be left with no choice than to treat them like Boko Haram ”

He stated that those so far released from terrorists’ den by the military, were being rehabilitated “physically, psychologically and in all aspects. Their education is being taken care of as well. Talks are ongoing on the release of the remaining girls. Many more would be released,” he assured.

During his presentation, Adesina called on the need for there to be synergy between the Military and the media , in the former’s bid to tackle insurgency.

He said “There must be synergy between the military and the media for national development. The military must arrange controlled access for the media at all times. It must know that communication with the public is not optional but an obligation and in national interest.

“All the media wants is information. So, the military should ensure that the media is fed on the need to know basis. Meet the reporters midway by providing information that would not jeopardise operations. There should be opportunities for open and independent news coverage facilitated by the military.

“Both the media and the military run on ethics. But, they are not mutually exclusive of each other. A relationship of creative tension must be accepted as a democratic necessity,” he said

Earlier, while declaring the three-day workshop open, the Chief of Army Staff COAS Lieutenant Gen. Tukur Buratai disclosed that the Military had succeeded in reclaiming areas that the militants once took over.

He however lamented that inspite of the effort the Military had put in the ongoing fight, some section of the the media had failed to recognise their inputs.

Buratai who was represented by the Chief of Civil-Military Relations, Maj. Gen. Peter Bujie, attributed the breakthrough in the fight against insurgency to the use of new generation warfare techniques.

He said: “We have completely degraded the insurgents. At the moment, we are carrying out clearance operations. Most of the areas initially occupied by the insurgents have been reclaimed and a lot of them captured.

“But they come out in small cells and attack soft targets. So, we are making efforts to restrategise and trap them in order to eliminate them completely