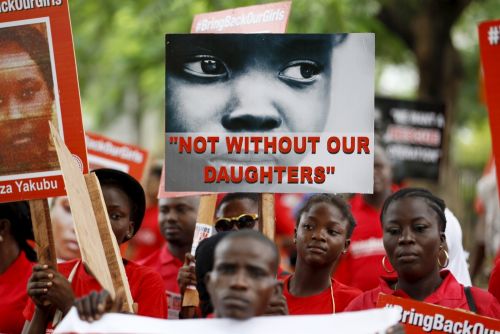 The mother of one of the 276
Chibok schoolgirls who were kidnapped by
the Nigerian militant group Boko Haram from a
public school in the Borno State in 2014 says
God will help her and the rest of her village
overcome the adversity and uncertainty that they face.

Although it has been over two years since the
Islamic State-affiliated terrorist outfit abducted
the schoolgirls from the government
secondary girls school in Chibok on April 14,
2014, only one has been rescued so far.

One Chibok mother, who had her 15-year-old
daughter kidnapped by the militant
organization on that fateful night, became the
first parent of a kidnapped Chibok girl to leave
Nigeria to speak out about the mass abduction
outside the country.

The mother, who goes by the name of “Mary,”
recalled the details of the abduction and the
aftermath during a panel discussion on the
Nigerian human rights situation in Washington
D.C. The discussion was hosted by the Heritage
Foundation and organized by the religious freedom group 21st Century Wilberforce
Initiative.

Prior to the abduction, the Borno State had
closed down as many as 85 schools in March
2014 due to the threat posed by Boko Haram,
which has become notorious for being one of
the most ruthless and deadly Islamic terrorist
groups on the planet.

When the decision was made for the Chibok
girls to go back to school, Mary said she went
to the school to plead with the principal, who
happened to be her own aunt, to let her
daughter stay with her sister instead of forcing
her to sleep in the school’s dormitories. Mary feared the insurgents would target the school
and its dorm filled with sleeping and
susceptible girls.

After news circulated through the village that
Boko Haram conducted a midnight raid on the
school and kidnapped most of the girls, Mary
said everyone in the town was grief stricken.

“The whole village was shouting and
screaming, all of us were traumatized,” she
explained. “[You couldn’t] know whose baby
is missing and whose babies are not missing
because everybody in the village was
traumatized.”

Mary, whose daughter turned 18 on
Wednesday, said the principal of the school
received no punishment from the government.
Instead, Mary said her aunt was rewarded by
the Borno State governor following the
abduction.

“Nothing [bad] has happened to her. [She has]
only been given an award and gifts from the
governor of Borno State,” Mary said.

Elijah Brown, the executive vice president of
21st Century Wilberforce Initiative who was
also a panelist, interjected and asked, “So you
are saying that the governor has rewarded
your aunt following this attack?”

“Yes, by buying cars for her and building
houses for her,” Mary clarified.

Mary explained that the one kidnapped girl
who has returned to the town after she was discovered with a baby, Amina Ali, has provided the town with a wealth of information
about the other missing captives.

Mary said that as many as six of the kidnapped
girls are believed to be dead. She added that
half of the kidnapped girls have been married
off to militants and are now located in various
villages, while the unmarried girls are located in
the Sambisa Forest.

Mary called on the international community to
pray for the kidnapped girls and their families.

According to Mary, as many as 15 to 20 of the
kidnapped girls’ parents have been killed since
the abduction.

“We really need your prayers if our girls will be
found,” she said. “[I hope] you will help us also
to rescue the lives of the dying mothers. We
have many parents on their sickbed  — some
have been psychologically affected, some have
spinal cord problems and can’t even stand and walk.”

“To all who have said prayers, thank you all. It
is needed and is really helping us,” she
continued. “The Lord almighty … He will see us
through and one day, we will all rejoice and be
glad He did.”