MUSIC Premier: Shanta Atkins – Made Up My Mind 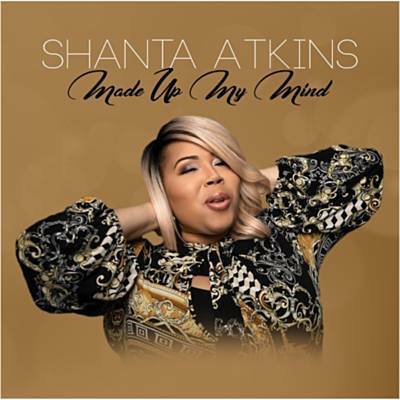 LOS ANGELES, CA. (April 22, 2020) – National recording artist and songwriter Shanta Atkins has released her highly anticipated single “Made Up My Mind“. Most may know her as the younger sister to the Grammy Award winning Gospel duo “Mary Mary”.

Shanta’s experience as recording artist has her prepped to now blaze a trail all her own. “Made Up My Mind” displays Shanta Atkins powerful vocal ability and anointing.

The single is just what fans and the gospel music industry have been waiting for from Shanta. Reviews from music industry veterans and listeners have been extremely positive. “Made Up My Mind” is currently available on all digital and streaming outlets.

“THIS IS GONNA BE ONE OF THE HOTTEST SONGS RIGHT HERE! THIS A REAL SONG. A GAMBIT OF EMOTIONS IN PRAYER…WITH BEAUTIFUL RESOLVE!” ~ DONNIE MCCLURKIN

Listen to Audio below

MORE ABOUT SHANTA
Shanta is no stranger to the industry. She has appeared on hit reality show MaryMary which aired on WE tv. Her talents also have afforded her opportunities to perform nationally and abroad. Some of her prominent appearances have been on platforms such as the SOAR Awards, Soul Train Awards, BET Awards, Jay Leno Show, Arsenio Hall Show and Oprah Winfrey to name a few. She can be heard on recorded projects with Kanye West, Mary Mary, Jason Champion, Al Green and Dorinda Clark-Cole. She has also shared the stage with music great like Natalie Cole, U2, YolandaAdams and BeBe Winans.

One of Shanta’s previous singles “God Sees You” gained her traction on the Billboard Charts. Shanta Atkins is not only as an artist with a great voice but also an amazing songwriter. With life wrapped in her voice, her spiritual upbringing inspired her to lend her gifts and talents to the forgotten and emotionally wounded. She can be found in impoverished communities across the globe serving and empowering women, men and children. She uses her natural and spiritual gifts and talents to help heal hearts and empower souls. Shanta is an avid promoter of education and her professional career encompasses the work of a educator, missionary, and activist. Along with being a recording artist she also host “The Shanta Atkins Podcast” on “The Bridge Network” and is the Executive Director of Love Changes Lives Inc. which is an organization that offers spiritual counseling, personal empowerment, vocal coaching, summer music programs. Shanta is currently available for interview and special appearance opportunities.