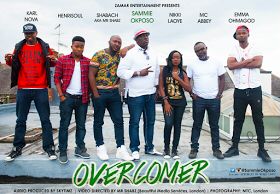 Produced by fast rising producer, SkyTimz,
OverComer is a groovy, hillarous yet inspiring song
– an expression of the confidence and swag of a
Believer, based on the promises of God, in the face
of Life’s issues and Negativity.

Together, they creatively sound the bell of warning
in a modern Nigerianese depiction of the popular
scripture verse – “The Lord is my Light and
Salvation, Whom Shall I Fear, The Lord is the
strength of My life, Of Whom Shall I be afraid?

The Video was shot and directed in London by
Shabach aka Mr Shabz for Beautiful Media Services
and Photography by Michael Tubes Creations, UK

OverComer is one of the singles from the upcoming
studio album, S.W.A.G (Saved With Amazing Grace)
to be released later this year.