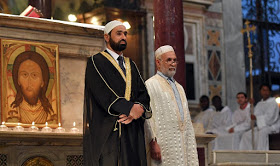 Muslims attended Catholic mass in churches
around France on Sunday in solidarity following
the brutal murder of an 85-year-old priest, Father
Jacques Hamel by 2 ISIS jihadists. More than 100
Muslims were among the 2,000 people who
packed the 11th-century Gothic cathedral of Rouen, near the Normandy town where the
priest’s throat was slit.

“I thank you in the name of all Christians,”
Rouen Archbishop Dominique Lebrun told
them. “In this way you are affirming that
you reject death and violence in the name
of God.” 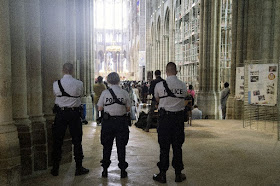 A few policemen and soldiers stood guard outside
but did not conduct searches on the attendees.
The local imam Otaman Aissaoui led a delegation
of Muslims to a Catholic mass and said:

“Being united is a response to the act of
horror and barbarism.”

“It’s an occasion to show (Muslims) that we
do not confuse Islam with Islamism, Muslim
with jihadist,” said Reverend Jean Rouet.

Muslims were responding to a call by the French
Muslim council CFCM to show “solidarity and
compassion” over the priest’s murder on Tuesday.

A woman wearing a beige headscarf who sat in a
back pew at a church in central Paris said:

“I’m a practising Muslim and I came to share
my sorrow and tell you that we are
brothers and sisters.” Giving her name only
as Sadia, she added softly: “What happened
is beyond comprehension.

At the Saint Leger church in the northern city of
Lens, around 30 Muslims attended mass wearing
T-shirts emblazoned with messages such as,
“Terrorism has no religion or identity”.

Father Hubert Renard told the congregation: “We
are not alone; our Muslim brothers are here too.”

Many were moved to tears during the sign of
peace, a regular part of the liturgy when the
faithful turn to greet each other in the pews, either
shaking hands or kissing.

Muslims also attended Catholic masses in Italy,
notably at Rome’s Santa Maria di Trastevere
church, in response to a call by the Sant’Egidio
community known for its international mediation
efforts.

Also on Sunday, dozens of prominent Muslims
published a joint letter pledging: “We, French and
Muslim, are ready to assume our responsibilities.”